submitted by Archaeological Institute Of Athens, Sydney on 17.05.2010

The view of the Parthenon from the Institute's Hostel in Athens 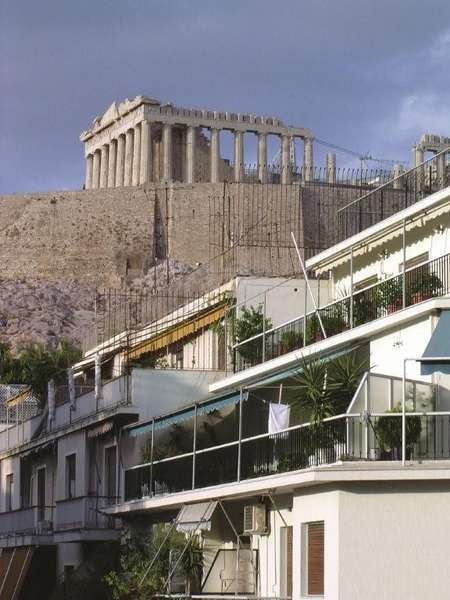 The Australian Archaeological Institute at Athens was established in 1980 following negotiations with the Greek government. The Institute is similar to the other scholarly institutions in Athens maintained by major European and American countries. Some of these, such as the French School (École Française d'Athènes), the American School of Classical Studies at Athens and the British School at Athens have existed for well over a century. In 2010 the AAIA turns thirty and although it receives no Government support it is well-established among the other sixteen Foreign Schools in the Greek capital.

The AAIA was founded by its current Director, Professor Alexander Cambitoglou who arrived in Australia in 1962 and became the first person of Greek background to be appointed a University Professor in this country. As Professor of Archaeology one of his early initiatives was to establish the first Australian Archaeological Expedition to Greece, to the site of Zagora on the island of Andros, and later on to the site of the ancient city of Torone which lies on the Sithonia peninsula in Chalkidike. He fostered this fieldwork through his personal and professional contacts in Greece, but knew that with his death or retirement Australian archaeological field work in the country would cease without the existence of formal Australian cultural representation in Athens.

Thus the idea of the AAIA was born, but its establishment was only achieved with great effort! And once it was in existence its growth was not guaranteed and has only been secured after years of hard work by the Director, by the staff and by the many, many supportive members of the public and of the Greek community who have helped it prosper. For his achievements Professor Cambitoglou has been honoured in this country with the award of an Order of Australia and in Greece with the award of an Order of the Phoenix, both granted for services to the discipline of Archaeology.

Fundamentally, therefore, the purpose of the Institute is to represent Australian scholars in Greece who wish to undertake archaeological research - which it does through applying for permits for fieldwork via the Greek Ministry of Culture. Its role, however, is very broad since its constitution supports the promotion of Hellenic culture in general, including Classical, Byzantine and Modern Greek Studies.

To further these aims AAIA’s activities have become national and international in scope. Its Australia-wide membership includes many enthusiastic individuals, each of the major Universities in Australia that teach Classics, Ancient History or Archaeology and cultural organizations like the Powerhouse Museum and a number of high schools. We are proud, for instance, to include a high school from the Greek Orthodox Archdiocese, St. Spyridon’s College, as one of our members as well as St Andrew’s Greek Orthodox Theological College. In addition Societies of Friends of the AAIA have been founded in each Australian state and in Athens. These groups offer scholarships and run public fund-raising events to support the AAIA and promote its aims.

One of its major contributions in Australia is the annual Visiting Professorship which brings a distinguished scholar from Europe or America to lecture and give seminars in all the major Universities of the country. Recently it has also created a Visiting Professorial Research Fellowship that will bring to Australia at regular intervals for a period of a few months a distinguished foreign scholar to do his or her research in Sydney.

The Institute’s headquarters are in the University of Sydney where its main library for archaeologists is kept and where its administration is based. On campus it maintains strong connections with the Department of Classical Archaeology, the superb Nicholson Museum of antiquities and the Centre for Classical and Near Eastern Studies of Australia with whom it shares many facilities.

The Institute also has an office in Athens which helps Australian scholars that need to carry out research in Greece and a hostel in that city as well. The hostel is a wonderful place, an apartment in Makriyianni close to the Acropolis and the new Museum that provides simple and decent accommodation for students, scholars and members of the public who choose to stay in it. In Athens the AAIA runs an academic programme of lectures and seminars for the local academic community and a summer school in collaboration with the Department of Classical Archaeology of the University of Sydney designed primarily for Australian university students. It offers a fellowship every second year and every year it offers a number of scholarships for students to travel to Greece. Last but not least it carries out fieldwork in Greece, presently at Torone in northern Greece, Zagora on the island of Andros and at Kythera. From 2009 it has also become a sponsor of the Australian Archaeological Mission to Paphos in Cyprus which excavates at the ancient city of Nea Paphos and its important theatre.

Last week the AAIA celebrated its thirtieth anniversary with a reception designed to acknowledge the Institute’s many achievements and the people involved with its establishment. This was held in the presence of the Chancellor of the University of Sydney, Her Excellency Professor Marie Bashir AC, CVO (who is also the President of the Institute), The Greek Ambassador, the Cypriot High Commissioner and the Greek Consul General.

The programme for the evening included a short speech by Professor Cambitoglou about the “Prehistory” of the AAIA which listed many of the personalities who were integral to the development of the Institute, a short talk entitled “The Northern Frontier: Greeks and Thracians in Ancient Argilos” by the AAIA’s Professorial Research Fellow, Professor Jacques Perreault. The event concluded with the award of the Institute’s inaugural gold medal for scholarly distinction in the Classics and Archaeology to the eminent academic Professor Graeme Clarke AO.