submitted by Kytherian Association Of Australia on 24.02.2012

View/upload a copy of the O Kosmos article about the opening here:

In 1922 a group of Kytherian migrants, recently arrived in Australia, met in a café in Sydney to plot the destiny of a new fraternal association, to be called the Kytherian Brotherhood of Australia.
For those founding members, it was paramount to provide a new spiritual home for the thousands of migrants who were to follow in the migration waves that saw much of Kythera’s young men and women travel to Australia to establish a new life in a new home.

After years of making property investments and then an ill-fated attempt to run a licensed social club in Regent Street Chippendale, the Kytherian Association of Australia (as it is now known) has finally established a magnificent cultural resource centre, library and meeting room at its premises at Level 1 / 24 King Street, Rockdale. 2216. NSW.

On 17 February 2012 the realisation of a dream to establish a spiritual home for Kytherians in the diaspora was finally celebrated with the official opening of the New Kythera House. In the presence of the Consul-General of Greece, Mr Vassilios Tolios as well as invited guests and dignitaries, Father Sophronios Konidaris and Fatgher Constantinides Varipatis performed the agiasmos blessing of the new cultural space.

The President of the Kytherian Association, Victor Kepreotis, opened the proceedings by reminding everyone that this new cultural and historical resource centre was as a result of the combined efforts of successive committees over the years and represented the centrepiece of the Association. He paid tribute to the inspired architectural design by architect Eva-Marie Prineas and the work of the builder Stan Giaouris in helping to complete the extensive refurbishment. Father Sophronios congratulated the Kytherians for remaining close to their roots and being proud of their heritage in constructing a dwelling which would be of much reflection and education. He also wryly observed that, just as in Kythera a stationary car can be seen rolling gently uphill near the famous Monastery of Myrtidiotissa, so Kytherians were being drawn inexorably closer to Our Lady of the Myrtles Church in Kogarah by having relocated from Chippendale to Rockdale.

The Greek Consul-General noted that a lot of devotion was evident in the creation of this new cultural space and was also a vivid representation of Kytherian activities, not just here but around the world. According to Mr Tolios, this gives us hope for the future and for our younger generations. 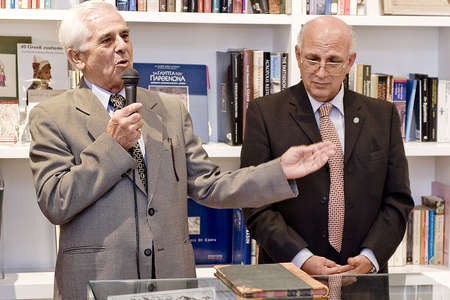 A highlight of the evening was the re-presentation of the first minute book of the Kytherian Association that had been held in safe custody up until now. Past President John Prineas read from the exquisitely hand-written minutes of the first meeting held on 14 May 1922 and for a moment it was as though the room had been transported back in time. Ninety years later, the Kytherian torch still burns brightly in the diaspora.

The new resource centre has an excellent library which is not just Kythera-specific but covers many themes relating to Hellenism and the general migration experience. Other subject areas include the Greek War of Independence; Byzantium and Greek Orthodoxy; archaeology and the Minoan colonisation of Kythera; Classical Greece and the history of the Parthenon; Greek folkloric costumes and dancing; Hellenic cuisine; photography; the Smyrna catastrophe and Greece during World War II; modern Greek history and much more.The cultural centre also features computers, scanner, printers and a large drop-down screen and projector to enable lectures and presentations to be made. The centre will comfortably seat up to about 80 visitors.

On the Saturday and Sunday following the official opening the doors were open for members and their guests to visit the library and view the facilities. Over 150 people took up this opportunity and the general consensus is that the Kytherian Association has succeeded in establishing a state of the art meeting room and library and conference facility.

The new Kythera House library and research centre is a welcome addition to the Greek-Australian cultural landscape.

Our intent for this project is to create a contemporary and flexible interior, capable of accommodating the different functions required by the brief. The programme requires the space to transform from office/ library to conference facility to a small auditorium for talks/lectures.

The position of the windows dictated the general layout - leaving the services defined in a pod pulled away from the walls, housing 2 toilets and kitchen. The pod allows all the circulation to have more than one function, enabling the most efficient use of space. All perimeter walls house bespoke built joinery for the library, kitchen appliances and other storage.

A translucent, polycarbonate ceiling now lights the originally narrow and dark entry stair. The Blackbutt hardwood floor was selected for the stairs and the main space for its warmth in colour and ease of maintenance.

Beyond the frameless glass entry door, a back-lit onyx plinth acts as both reception area and display case for precious artefacts.

Joinery units and display cases have been designed to be mobile, enabling the space to be cleared to accommodate larger numbers for talks. Storage for 60 chairs and a folding conference table is concealed behind perimeter joinery. Vertical proportion and concealed detail allows this joinery to read in an ambiguous way, serving to extend the reading of the space.