submitted by Kytherian Cultural Exchange on 10.02.2015 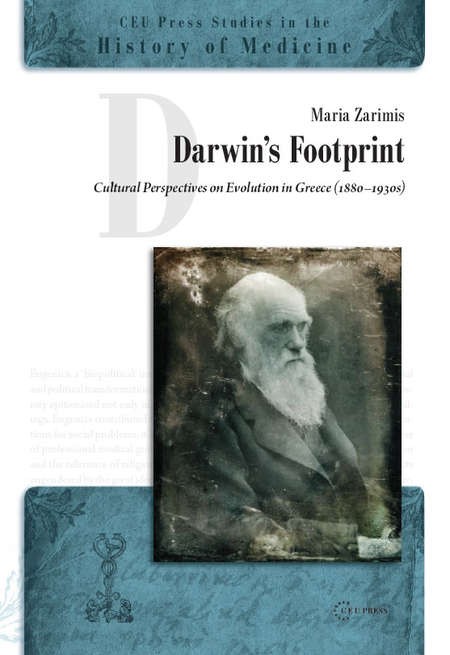 Darwin’s Footprint examines the impact of Darwinism in Greece, investigating how it has shaped Greece in terms of its cultural and intellectual history, and in particular its literature.

The book demonstrates that in the late 19th to early 20th centuries Darwinism and associated science strongly influenced celebrated Greek literary writers and other influential intellectuals, which fueled debate in various areas such as ‘man’s place in nature’, eugenics, the nature-nurture controversy, religion, as well as class, race and gender.

In addition, the study reveals that many of these individuals were also considering alternative approaches to these issues based on Darwinian and associated biological post-Darwinian ideas. Their concerns included the Greek “race” or nation, its culture, language and identity; also politics and gender equality.

'It is with great pleasure that I salute the publication Maria Zarimis's book on the reception of Darwinism in Greece. This is an original and pathbreaking book which will make a considerable contribution to the scholarship on Greek and European cultural and intellectual history. It commands respect for its wide range of primary source and its thought-provoking interpretation. It is without a doubt the most authoritative account of this subject."

Synopsis: Charles Darwin’s theory of evolution revolutionised biology and deeply influenced modern thought. But how did Greeks react to it? Dr Zarimis discusses Darwin’s influence on concepts relating to the nation, language, culture and politics.

“The original and significant contribution [of] this book […] derives from the fact that so little has been written, so far, about the influence of Darwin’s writings and Darwinism on Greek literary and social culture” (Emeritus Professor Peter Bien). The event celebrates the centenary of the Greek translation of Darwin’s Origin of Species by Nikos Kazantzakis, one of the authors discussed in the book.

Antonis Liakos, Professor of Contemporary History and History of Historiography, University of Athens

“Maria Zarimis’ book is a thorough and in-depth analysis of how mainstream Western scientific ideas found their way into the planning of the modern Greek society through the intermediation of literature. In this sense it strongly contributes to various academic fields, expanding from literary studies and history of science to social history and cultural studies. Furthermore, it contributes to the discussion of travelling concepts and of the role intellectuals hold in this process, while at the same time sheds light onto the multiple ways transnational history is formed.”

The event was part of the Greek Festival of Sydney program.

View / download a .pdf the publishers flyer on the book, here:

"Books, like births, deserve to be ritually celebrated when they come into the world. Both take much labour but both have, one hopes, long lives before them. Indeed, a book brings with it at least the illusion of a sort of immortality with the hope that the book will be there for those interested in the topic for the foreseeable future. It is, then, an occasion to congratulate and rejoice with Maria as her long gestating book has appeared before the world. It has been the fruit of much intellectual travail. Distilling very wide reading into a form which is comprehensible to others and which adds to the store of knowledge takes much thought and much close concentration and, above all, much time.

The theme which Maria has addressed is one which is central to our culture. Darwin’s long shadow (or, in the metaphor of the book’s title, his footprint) looms very large. Since the appearance of his Origin of Species in 1859 assimilating the insights it offers has been one of the major tasks of all concerned with understanding the human condition. The appearance of the Origin meant thereafter human beings had to rethink their relations to nature. The Origin is one of the handful of works that really meant that our conception of who we are and how we got here had to be reassessed. So momentous were his findings that we are still assimilating what they all mean.

One of the fundamental tasks is to relate Darwin’s insights to our larger culture and explore what he means for our conception of human nature. That means venturing beyond the purely scientific to reframing some of the ways we portray human behaviour in our literature and art and in our discussions of what it means to be ethical. The wider we caste this cultural net the better our sense of how we can incorporate what Darwin had to say within our established traditions. The impact of Darwin on some cultures, such as his own one of Britain and others with which he was familiar such as France and Germany, has been explored in detail. The impact of Darwin in Greece has, however, been relatively neglected -- in part because Darwin’s work came rather late to Greece. As Maria points out, it is telling that the first Greek translation of The Origin of Species (by the great Greek novelist, Nikos Kazantzakis) did not appear until 1915. Few would have the intellectual background to draw out such a study but Maria came to the task with unusual bodies of expertise. In the first place she has studied and worked in both the sciences and the humanities and, secondly, she is at home both in the language and culture of Greece and the Anglophone world which was the intellectual environment of both Darwin and most of his interpreters.

Maria, then, is a very appropriate person to draw out some of the ways in which Darwin’s work impacted on Greece. As she shows us, in the realm of culture there is rarely a one to one correlation between a scientific idea and its representation in literature. Rather, in the book she has a close ear for the wider resonances of Darwin’s work as the ripples thrown out by his ideas take in a wide array of imaginative responses. The picture she paints on the basis of much detailed attention to texts which so far few have studied closely is a diverse and illuminating one. For Greeks, as for others, Darwin meant pondering anew some of the central values on which their cultures was based. Quite what was Darwin and what was people using Darwin to promote their own ideologies was often a moot point. Whether or not Darwin would have given his support to some of the programs of eugenics which involved selective breeding of human populations to improve the gene stock is debatable. Nonetheless, this was something with which novelists in Greece, as in other places like England, had to grapple to come to terms with the wider repercussions of his ideas."

View / download a copy of the O Bhima (Greece) review, as a .pdf, here:

Review by the Ambassador of Greece in Australia, Haris Dafaranos,19th May, 2015. Canberra.

I would like to congratulate the Greek Bilingual Bookshop for the initiative to present Dr. Maria Zarimis' book "Darwin's Footprint".

Dr. Zarimis, a biomedical scientist and scholar of Modern Greek brings to us with her book a very interesting dimension on how evolution theory has fertilised the Greek intellectual thinking.

The concept of evolution has proved to be a very interesting dimension for new argumentation on issues which have affected Modern Greeks since the 19th Century, that is national identity and language. It fertilised a discussion on how we can improve ourselves in terms of culture and mentality and the proper education for our youth.

Dr, Zarimis refers to the acquaintance of eminent Greek poets and writers with Darwinnism. Allow me to focus on two big spirits of Greece: Kostis Palamas and Nikos Kazantzakis.

Palamas very eloquently spoke about the war of ideas. He linked the continuity of the greek language to the continuity of the Greeks. The demotic language was the "the living, uncultivated language of the people". For Kostis Palamas all great ideas "are not born suddenly and at once, but are made, evolve return, never the same, but always varied; but in their essence, the same. And one such example is Darwinism".

Nikos Kazantzakis is equally eloquent expressing his state of mind like this: "the trouble with our times is that we are caught up in the middle. On the one hand, we have lost our spontaneous appreciation of the world's beauty; on the other, we have lost our faith in the heavens above. We cannot be pagans because Christianity has poisoned our attitude towards material things. Darwinism has destroyed the perfect spiritual world , which is the necessary basis of Christian behaviour. We are thus the melancholy victims of a transitional age."

And I will conclude with the tasks Kazantzakis entrusts us with as a moral duty to our ancestors in the process of the continuation of humanity:

• Feel within you all your ancestors.
• Continue their work
• Pass on to your child the great mandate to move on and become better.

Finally, I cannot omit Grigorios Xenopoulos' remarks on God and Science. His position will be that no scientific theory can touch on the concept of God. Science and Religion are the closest friends and one helps the other for the prosperity and progress in humanity.

We thank Dr. Zarimis for her scientific work and the opportunity to remind us how the illuminated minds of Greece received evolutionary theory as progressive European intellectuals endowed with a long history and culture.

This thinking remains timely today more than ever.

I thank you very much for the opportunity to communicate with you on this beautiful occasion.

View / download a .pdf version of the Dafaranos review here: