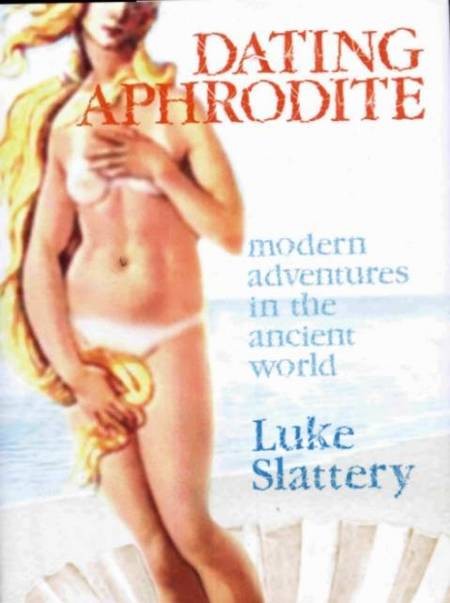 Luke Slattery might be a “stranger” to the Greek Community of Sydney - at least for the time being - but Greek history is no strange subject to him. His love and knolwledge of the Ancient Greek civilisation and its myri­ad stories, is well documented through his countless art­cles that have been pub­lished in the mainstream Australian press.

Further­more, Luke Slattery, a journalist who has written for The Australian, The Australian Financial Review as well as The Age and Sydney Morning Herald, has wrilten extensively about Greek philosophy, and and traveling in Greece. Therefore, it comes as no suprise that Slattery has de­cided to pass on his knowl­edge through a new book Dating Aphrodite: Modern Adventures in the Ancient World (ABC Books, $32.95).

To celebrate the release of the book and to officialy wel­come the well-known philhel­lene into Greek society, the Press and Communications Office of the Greek Consulate Gen@ral in Sydney, held a special function at 6.00pm on December the 16th, with the writer talking about his publication.

It is hard to imagine a more companionable guide to the myths and heroes, ideas and at­titudes of the ancient Greeks and Romans than Luke Slat­tery. He weaves his elegant dis­cussions of the stories and per­sonalities of the ancient world into the narrative of his own wanderings on classic soil. At Gallipoli, near the Site of an­cient Troy, he introduces us to The Iliad. Homer’s story of vio­lence, defeat, heroism and re­spect for the enemy, becomes all the more powerful, when it is brought into dialogue with our own need for myth and truth. Then Slattery is off to Ithaca, the home Odysseus took so long to reach.

Weaving together the charming narrative of his own journey with bright, intelligent discussions of the great themes of ancient culture - love, the gods, the meaning of life -serves a serious purpose.

Slattery is determined to dis­play the continuing relevance of Greek and Roman culture for us today. Ironical1y, pushing rel­evance too hard has a bathetic effect - it veers to the ridiculous. What, for example, can we learn from paganism, with its multiple limited and imperfect gods? Well, perhaps we could apply this today. It sounds quite nice, but really what it means is that religious people should give up their beliefs. It’s completely un­clear what it would mean to think that Allah is one god a­mong many or the god of the Christians is limited. Slattery hasn’t thought this through.

But this is a minor point: “rele­vance” doesn’t require lifting specific beliefs form the past and dropping them into moder­nity. A deeper insight into rele­vance is given in the fine discus­sion of nostalgia. I had always felt embarrassed by my own
tendencies in this direction, fearing that there was some­thing disreputable about this emotion.

In Slattery’s generous and perceptive analysis, it be­comes something wonder­ful: “we need a name for good nostalgia, which leads us to the past but does not abandon us there”; and re­veals this hankering as a permanent condition of culture. He admits to an aching longing to return to an imagined home, the dwelling place of Greek myth. We tend to be a bit nervous about such ret­rospective desires; but because Slattery is so obviously at home in the modern world as well we can tak courage from his example. We may have feared that nostalgia was incompatible with being up-to-date. But he shows us how these things sit together; like much good education his writ­ing encourages a more sensible ‘view of ourselves.

It is striking that Slattery achieves this liberation not by bludgeoning us with clever ar­guments or forcing a grudging intellectual assent but by example - by being nice to us. For fear of nostalgia is just that, a fear, and the way past fear is the right kind of leadership, not the marshalling of intellectual bat­talions. Nostalgia as he puts it can be “a conduit for the ideas and tastes of the Greek world” into our own: “a source of ener­gy and renewal; a live current”. Slattery is teaching us how to love what he loves. This is the fi­nal truth about relevance: we po don’t love something because it thi is relevant; whatever we can re-learn to love becomes intimately relevant to us.

Slattery is bold enough to say un what he honestly. feels: that the ancient world has left us a legacy of “undying value”; and wise enough to know that appreciating that legacy is a matter of enjoyment, not duty. Because Slattery has made his name as a journalist (and his journalistic inheritance is a little too apparent in the sub-chapter headings) we might not appreciate just how sharp his insights are. In his discussion of the interplay of the god Apollo, who embodies restraint and reason, and Dionysus, who celebrates riotous excess, Slattery follows in the the steps of Nietzsche.

But despite having taught Nietzsche’s thesis, I found Slattery’s discussion bringing home home for the first time precisely the power, and the limitations, of this idea. Slattery’s work is rep­resentative of a movement in modern thought,- one that, as yet, has no special name. He is unafraid of being serious. He wants to understand and discuss the great topics of life; but he is generous and easy with his knowledge; he focuses on why ideas matter, how they connect with experience. He liberates the university ideal (love of knowledge) from its typical fail­ings (obscurity, technicality, gracelessness); he absorbs the postmodern vision of freedom - -why not mix the genres of travel writing and ancient history - but avoids its irritating “cleverness” and irony. The reader is treated as a friend, someone with whom the writer can be sincere as well as entertaining. Perhaps such writing needs no name, other than the name it has always had: humane literature.

“Dating Aphrodite, modern adventures in the ancient world” is a book about Ancient history, philosophy and travel to sites of Antiquity.
The author of “Dating Aphrodite”, Luke Slattery, unfolds his exquisite analysis of the myths, gods, heroes and philosophies of Greek Antiquity. His writing is so convincing, so proficient about the Ancient World that makes you think he was nearby, present to the historical events, conversing with the protagonists, reporting with his journalistic sense about the past for today.
Luke Slattery’s journey is a delight. He popularises the complex ideas of Antiquity and takes the reader to the original sites where the ancient spirit shines eternally. He travels to Troy, theatre of war in Iliad, close to Gallipolis of the Anzacs, to Ithaca, the Odyssey’s destination, to Mani, in search of the author Paddy Leigh Fermor, to the Oracle at Delphi, the navel of the earth.
Luke Slattery depicts in an unparalleled way compelling Gods and Humans, their traits and deeds. Apollo and Dionysus, the symmetric Olympian Gods, Alexander the Great and his fusion of cultures, Zeno and Epicurus the two most companionable philosophic rivals, Aphrodite the goddess of beauty and harmony; are just some of the illustrious ancients skillfully elaborated in the book.
Slattery is a journalist, culture writer and book critic. His writing is positive and pleasurable and at the same time innovative, inclusive and inspiring. His work has appeared in The Australian, the Financial Review, the Age, The (UK) Spectator and The Times Literary Supplement, the International Herald Tribune.

The Press and Communications Office of the Consulate General of Greece in Sydney organized a presentation of “Dating Aphrodite” on the 16th of December at 6.00pm at its premises: (Suite 2004, 264 George Str, Sydney 2000).

Luke Slattery was present to speak about his book “Dating Aphrodite”.

'Greece has a profound and permanent message to mankind; it is humane and progressive and affects not only art but the whole of life.' Australian classicist Gilbert Murray


'Dating Aphrodite' is a modern celebration of the classics of ancient Greece and ancient Rome - their wisdom and humour, as well as the insights they offer our contemporary world.

In the best tradition of Alain de Botton and Simon Schama, journalist and traveller Luke Slattery illuminates the classical ideas underpinning so much of modern civilisation - our literature, art and architecture, our democracy, science and even our religion - with a cheeky sense of irony.

A combination of travel book, history book and a meditation on what it means to be living in the media-saturated twenty-first century, 'Dating Aphrodite' takes you to the actual places where the big ideas of Western civilisation were born. Slattery shows you the real landscape and explains how, even today, the spirit of these places and the meanings that can be found there shine through.

'Dating Aphrodite' follows 'the footsteps of the ancients on a journey in search of ourselves'.