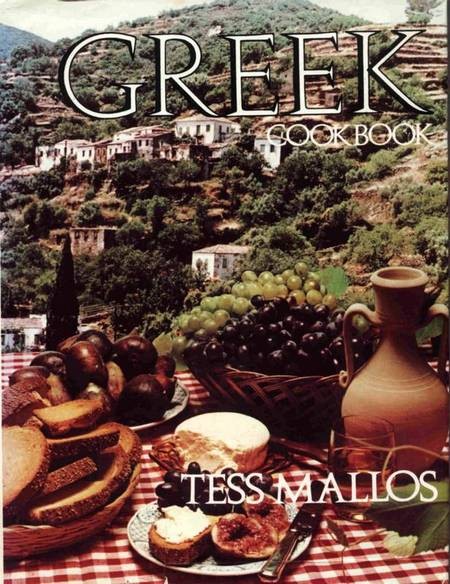 The most famous and influential Kytherian and Greek Cookbook by far.
It's publication had a profound influence not only on Greek cooks, but on Australian cooks as well. It altered the way Australians thought about food, and faciliated the shift from the Australian preference for bland English cuisine to - the eclectic European cuisine that Australians now take for granted. (The average Australian in the 1970's would probably have preferred to die rather than eat an olive, eggplant or zuchhini!)

The book contains numerous recipes, and the full-colour photographs are "works of art".

The book is used, and is a valuable resource, in Kytherian and Greek homes throughout Australia.

"Greek cookery, historically a forerunner of Western cuisine, spread its culinary influence - via ancient Rome - through-out Europe and beyond. The breadth and variety of Greek cooking will astound the uninitiated who so wrongly believe it limited to lobster, lamb and olive oil.

This book explains, in succinct step-by-step methods, more than 100 recipes to suit every course and occasion. The contents are: Appetizers, soups, sauces, meats, seafood, poultry, pasta and rice, vegetables, salads, pastries, cakes and cookies, preserves, breads and wines. They collectively confound the mischievous myth that Greek cooking is too ricj, too spiced or too oily.

The author, intensely proud of her Greek heritage, explains the historical and pronvinicial origins of the widely different food styles; some of which date back to the early olympics when victors were showered with honey cakes and other delicacies as tribute. All recipes are described by both their Greek name and the English equivalent.

The Greek Cookbook is more than an exciting ethnic repertoir, it is creative all-seasons cookery at its best - based on experience that reaches as far back as classic Greece itself".

Tess Mallos takes a great pride in her Greek heritage. Her parents from the Greek island of Kythera - emigrated to Australia where she was born and raised in a country town.
[Tess's father was Andonis Calopades, Yerohimona from Lianianika, near Logothetianika, and her mother was, Calliope Manolliaras, from Aroniathika. Andonis arrived in Australia at the turn of the 20th century as an 11 year old, and worked in the famous Kominos cafe in the central business district of Sydney. In 1919, he moved to Casino, where he ran the Marble Bar Cafe. Tess was born in Casino, New South Wales.]
The climate there favoured the cultivation of many popular Greek foods and she acquired a taste for home-pickled olives, globe artichokes and stuffed grape vine leaves before such exotic foods were appreciated by Australians.

Long since a resident of Sydney, Mrs Mallos has been involved in the food industry for almost half her life. Her cookery writing career began as a free-lance food consultant in advertising, creating and writing recipes for a wide range of food as well as preparing food for photography.

For the past few years she has worked as Food Consultant to the Australian Meat Board, and in that capacity writes editorials on meat cookery for some 80 publications throughout Australia, and 20 overseas countries. She is the author of a number of books on meat cookery and is regarded as an expert in the field.

This book shows her great skill and knowledge in an area of cookery which is her first love: and in her own words, 'to present my P.R. effort for Greece'.

Mrs Mallos has three children and wants them to be acquainted with as many aspects of their Greek heritage as possible. At least part of her ideal is accomplished with this book.