Greeks in the Far Orient

Description: 698 pages.
420 unpublished and rare photographs.
English, and soon to be available in Greek and Chinese.

The Prologue is a thorough Book Review by reknowned Greek-American historian and Professor, Spyros Vryonis.

Shedding light on the Greeks of the Far East, 1875-present 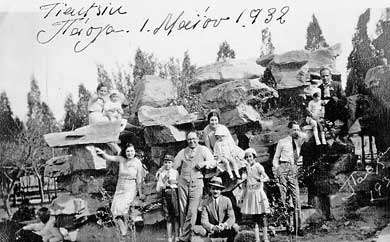 Above: A group of Greeks celebrate Greek Orthodox Easter in the countryside in Tianjin, China, in 1932.

After the end of World War II, the assistance provided by Greece for the reconstruction of Japan ranked second only to the USA, according to Melbourne University Professor Anastasios Tamis, author of the book “Greeks in the Far Orient,” published earlier this year in English and soon to be available in Greek and Chinese.

According to Tamis, more than 1,800 Greek ships were built in Japanese shipyards in the period from 1947 to 1970, while during the 1960s, some 8,000 Greek sailors landed every week at the ports of Yokohama, Kobe and Osaka, which had Greek tavernas and nightclubs. In fact, says the professor, many of these sailors formed intimate relationships with Japanese women. Some were brought back to Greece as wives, though at least 2,000-3,000 were abandoned by their Greek spouses, many with children born out of wedlock, which they either drowned or left to die. The existence of a graveyard on the outskirts of Yokohama containing the remains of such children, is just one of the chilling yet fascinating facts presented in the 580-page book.

The research of the historical tome presents three phases of Greek and Greek-Cypriot migration to countries such as China, Japan, Korea and the Philippines from 1875 to the present day. Split into three parts, the narrative begins with the immigration waves of 1878 to 1945, caused by financial strife and the religious persecution of Greeks in the Balkans and Turkey, and later under Stalin in the Soviet Union. 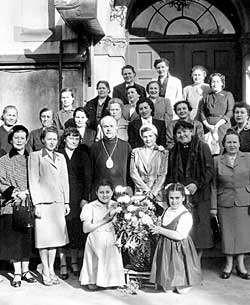 Greek and Russian parishioners pose with their bishop in front of a Greek-Orthodox church in Tokyo, known as the Nikolai-do, in the 1950s

The second phase concerns the 1945-85 period, which includes not only the classic waves of Greek and Cypriot migrants, but also the stories of fortune hunters and ingenious entrepreneurs who were ousted from China and Manchuria and sought greener pastures in Japan and other countries, as well, of course, as the stories of Greek and Greek-Cypriot sailors.

The final part concerns the present (1986-2010), and tells the stories of white-collar workers who got jobs with large multinational companies in the region and either moved back to Greece or moved on to other countries.

According to Tamis, the first Greek migrants to China -- from 1880 to 1955 -- came from Macedonia, Constantinople/Istanbul, Epirus and Cephalonia, and they were mostly merchants in tobacco, rugs, beverages and other Greek products. There were also around 3,500 Greeks from the Black Sea region, who were exiled by the Stalinist regime to Siberia and then made their way to Manchuria -- this is a very little-known chapter of the Pontic history.

The Greek presence in China, according to “Greeks in the Far Orient,” basically ended with the rise of communism. Many of the Greeks thrown out of China went to Japan, and some spent the rest of their lives there. The last wave of Greeks leaving China, in 1951-2, went to Australia and Canada.

The Greek presence in Japan was intrinsically linked to the country’s development as a maritime force. According to Tamis, the country saw an influx of Greeks in 1949, when 1,500 fled from China and 2,500 Greek-American soldiers were posted there. The Greek presence was further enhanced by the arrival of hundreds of thousands of Greek sailors. Many Greeks in Japan, like Patrick Lafcadio Hearn, distinguished themselves in the country’s artistic and cultural life.

Today, according to Tamis, there are some 300-350 Greek families still living in Japan and the community has even established a Greek school.

The research for the book was conducted over the course of five years, during which Tamis and his associates traveled to 12 countries in the Far East and Southeast Asia, tracking down and studying thousands of documents, collecting over 2,000 photographs and conducting more than 400 interviews.

“There is, nevertheless, a part of this history that is lost forever,” explains Tamis. “For example, with the onset of communism in China, we know that Greek diplomats tried to salvage consular documents by smuggling them out, initially through US-occupied Tokyo. Unfortunately, we were not able to trace them.”

Professor Spyros Vryonis, a Greek-American historian, has also participated in “Greeks of the Far Orient,” with the introduction, which constitutes an evaluation of the book, and also an epilogue, referring to his relatives from Cephalonia who had settled in northern China and Manchuria.

Greeks in the Far Orient, a book on unknown Greek communities

Greeks in the Far Orient, a 698 page volume by Professor Anastasios M. Tamis with 420 unpublished and rare photographs on Greek immigration and settlement in the East, is now available in English.

As prominent Byzantinologist and Islamist, Professor Spiros Vryonis, mentions in the book’s preface, the primary role of the publication is to narrate and analyze the history of Greek and Cypriot settlement in countries of the Far Orient and China, Japan, Korea, and the Philippines from 1875 until today.

The author’s research lasted over five years (2005 – 2010), covering twelve countries, while Professor Tamis specifies that his aim is to document and categorize the migratory mobility of within the context of three main different types of immigration.

The author and his team of researchers comprised of associate researchers and informants, identified, categorized, documented and analyzed thousands of documents and collected over 2.000 photographs (1890-2010). They held over 400 interviews with significant figures, pioneer settlers and their descendants, in their host countries, resulting in over 3.000 pages of oral history.

Furthermore, they located and studied a broad range of research material from private and state archives, hundreds of consular and diplomatic documents, diaries, books and magazines, news and articles from agencies and newspapers, issued in Japan, China, the Philippines and India (1890-2010).

Many of those who submitted data to the author and his team, shared their experiences from over two countries, others were characterized by constant mobility in countries of the East, yet most of them, having lived in eastern Asia for years, were eventually repatriated or migrated permanently to English – speaking countries in the U.S., Canada and Australia and Spanish – speaking countries in Latin America. Others were descendants of pioneer settlers, many were children of eminent Greeks in China and Japan, some were descendants of prominent figures from Japan, China, Korea, and the Philippines, coming from mixed marriages, who became leading figures in their countries, thanks to their immense contribution, such as Irene (Emi) Fukuzawa and Milton Adamopoulos (Adamson).

Further information for the research was obtained, among others, by sailors who abandoned their ships to marry local women and permanently settle in ports of Japan and Korea, opening their own restaurants and businesses. Also, silk, porcelain, tobacco and alcohol traders, with great experience in North China, Manchuria and Japan, who established export and import businesses, maritime company administrators, ship – owners, business staff, scientists and technicians, born in the host countries, and their children.

The official presentation of the book in Australia will be held on the 4th of November, while presentations in China, Japan, Korea, Philippines, U.S.A. and Canada, will be held from mid – November.

Greeks in the Far East: A Remarkable History

In his preface to the book, now available in English, Professor Spiros Vryonis, writes that the primary aim of the publication is to narrate and analyze the history of Greek and Cypriot settlement in countries of the Far Orient and China, Japan, Korea, and the Philippines from 1875 to date.

Professor Tamis, University of Notre Dame, Australia, conducted his research for over five years (2005 – 2010), covering twelve countries. The author and his team of researchers identified, categorized, documented and analyzed thousands of documents and collected over 2,000 photographs (1890-2010).

They held over 400 interviews with important Diaspora figures, pioneer settlers and their descendants, in their host countries, resulting in over 3,000 pages of oral history. An official presentation of the book in Australia is scheduled for November 4, followed by presentations in China, Japan, Korea, the Philippines, U.S.A. and Canada.