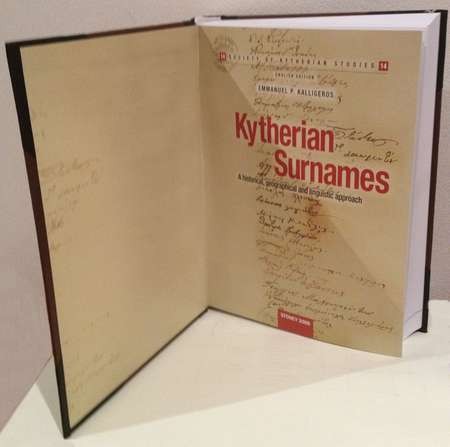 Description: Large, hard bound book. Brown cover with gold lettering. A replica of the original soft cover from the Greek edition has been placed on the inside page.

Availablity: In Australia from KWHF & the The Kytherian Association of Australia

In Kythera, Athens and Greece, is available from the author:

Also at the Archives Book Shop at the "Kastro", and all good bookshops, on the island of Kythera.

A translation of the original Greek edition which was published in 2004. Three organisations, the Nicholas Anthony Aroney Trust, The Kytherian Association of Australia, and the Kytherian World Heritage Fund, co-contributed significant funds to translate the original, and typeset, print and distribute the English version of this book.

A second printing of the original Greek version ensures that the Greek book remains in print. It is still available from most of the better book shops on the island of Kythera, and from the author - Emmanuel Kalligeros.

An historical, geographical and linguistic approach to the derivation of all / most Kytherian Surnames on Kythera.

This 670-page book contains a study of 256 family names from Kythera, their history on the island and their further dispersion to the broader area of the Kytherian Diaspora.

Kytherian Surnames remains one of the most iconic books with a Kytherian theme, that has ever been printed.

There is a lengthy introduction about the study of all family names that includes tables, indexes and an extensive bibliography on the documentation of the data mentioned in it. Every last name is analysed in detail regarding the family's history on Kythera and in the regions that influenced the island; its geographical mobility before reaching the island as well as its subsequent spread; its linguistic origin and further useful data.

Readers have the opportunity to wander into the magic world of names, to track down the family name of their interest and once they finish the book they will have a good overview of the human story of Kythera as well as of an important part of the island’s history.

From the 13th century onwards there is enough evidence of the existence of some family names on Kythera. Their main core is formed around the 16th century and, from then on, they travel within as well as outside the island. Many names from Kythera derive from nicknames, professions or other sources.

Prologue, by the by the President of the Society of Kytherian Studies, Professor Nikos Petrohilos

Even if the Introduction to Manolis Kalligeros’s study of Kytherian surnames was comprised of only the penultimate section entitled “Clarifications, idiosyncrasies, conclusions”, the reader would still be able to certify the deep and significant love that the author has for his homeland, the sweet “nostos” that entraps him and unerringly guides his writing, which for him is a source of inspiration in the search for and return to roots.

This is a book filled with several hundred pages and much labour. After an Introduction and general discussion of Kytherian surnames, the author proceeds to detail the idiosyncrasies of Kytherian bynames, distinguishing between:
a) surnames that derive from bynames developed in Kythera;
b) surnames from other regions, which appear on Kythera as bynames and form surnames;
c) surnames that have disappeared but which remain in the local repository of names as bynames; and
d) surnames that become bynames of other surnames.

This is followed by a section on the relations between some surnames and toponyms, immediately after which the movement of surnames to and from the Peloponnese and to and from Crete is examined. It is of course natural that, considering the period of almost six centuries of Venetian rule over Kythera, the researcher feels the need to dedicate a large section of his Introduction to the Venetian presence on the island, as well as the Kytherian presence in Venice, which had an unavoidable effect on the formation of Kytherian surnames.

Manolis Kalligeros subsequently focuses on different special cases and categories, factors in the formation of surnames such as piracy, merchants and sailors, administrative staff, soldiers and clerics, the diaspora and refugees, “nobles and popolani”, surnames with a Turkish etymology. He concludes his long Introduction by vividly underscoring the “dark points” of research, the difficulties of which no one can doubt.

The study closes with an alphabetic table of the long series of Kytherian surnames, which readers of the newspaper Kythiraika will have already encountered.

The Society of Kytherian Studies is especially delighted to be able to present this captivating and most useful work to all those Kytherian – and not only – readers who wish to research or simply to learn about the history of their surnames.

This is an exceptionally interesting collection and an exhaustive onomatological study, which in essence never ends and will be open to corrections, additions and changes. The amazing work of a Kytherian, the Vice President and active member of our Society’s Board of Directors, who loves his homeland with a passion, working vigorously and selflessly for it, and who has given us rewarding evidence of his successful research, specifically on our island and its history.

Yes, thank you for the wonderful book. History be our guide! After searching (and finding) my family surname (Leontarakis) I wonder why in the village, Fratsia, there are no longer any Leontarakis living on the island? And some areas/towns still carry the name of the first settlers. Thank you. RLM