Either it has been a long-hard winter or Kythera is definitely on the tourist radar. If the Easter swell of visitors, both Athenians and international is any measure of travellers Kythera-bound this Summer, those ‘Rooms for Rent’ springing up all over the island like wild artichokes will fill (at least in the month of August). A glorious sun put on its best for locals and visitors alike on May Day 2008, wrapping up the Kythera Easter celebrations with tender affection.

The solemn mood of Easter week leading up to Megali Paraskevi (Good Friday) and peaking with the midnight mass of Anastasi (Easter Saturday) was accentuated by the bleak weather. Weighted with symbolism and reflecting the sobriety of the Crucifixion,
Kythera’s most famous icon Panayia Mirtidiotissa (Madonna of the Reeds) journeys the island beginning in Chora and visiting as far north as Karava throughout the two weeks of prayer.

For the few unfamiliar with the Panayia Mirtidiotissa, the icon is the most enduring symbol of the global Kytherian identity. Folklore has it, and if you look at the icon in the monastery the story is carved in gold, a shepherd heard his sheep bleating at the reeds where they were grazing and when he went to see what all the fuss was about he found the icon, with its renowned faces of the Holy mother and Child laying there. Bursting with the Miracle he took the Icon to his village but every night the icon would disappear and re-appear in the reeds, till they finally concluded that they should build the church to house the icon on the reeds.

The icon is believed to be from the time of the ransacking of Constantinople and the desecration of Agia Sophia (the central Church of all the Orthodox World). It is possible that the icon suffered in these fires (explaining the blackened faces) and was hidden by pirates as part of larger bounty. The icon began to take on legendary proportions as every Kytherian household learnt of the healing qualities of Panayia Mirtidiotissa. Believers from all over the island as well as the diaspora made pilgrimages to the Panayia asking for help. The Monastery south of Kalokerines is definitely worth a visit, the original tiny chapel is still there, as are the most macabre talismans such as wax legs or wax babies, sent from all over the world. It feels more than coincidental that this icon with its every-mother & child face would suddenly appear in a new landscape – the parallel to the migrant experience is chilling. Innocents abroad

For Kytherian faithfuls Easter time is an extremely moving experience. The priceless Panayia icon leaves Mirtidia, under heavy police escort and is carried on a throne-like
Wooden structure held-up by four people. Initially it goes to Chora where it remains till Easter Saturday – visually it is all very Jesus Christ Superstar crossed with Zorba the Greek.

Easter week is also the pinnacle of the long (and times seemingly endless) 40 day fast.
And it doesn’t get bigger Church-wise than the Giving of Light on Saturday night to mark The Resurrection. All over Greece, home-made bangers go off endlessly during the service. This year in Agia Pelagia the Giving of Light was followed by a 20 minute firework display (very Sydney NYE). But come Easter Sunday out come the fattened lambs on the spit and it is a meatfest. This year an overcast Easter Sunday was washed out by rain and the tradition of roast lambs and picnicking on the beach was relegated to kitchens. (Personally it was a great time as a string of Australian-Greek girlfriends Margaret, Teena and Helen re-united in Kythera after 13 years.)

Throughout the Nea Evthomada (week following Easter Sunday) The Mirtidiotissa is carefully hauled from village to village, overnighting in the various local churches. A gloriously sunny May-day, people of all ages were out collecting wildflowers and making wreaths. So Kythera was ablaze with wildflowers decorating doorways, cars and of course The Mirtidiotissa

The most moving image I witnessed was today, as the icon was being jointly carried by Karavites (people from Karavas) and Pelagiotes (people from Pelagia) with the blue of the sea as background. The quiet strength of the Faithful as they waited to pay respect and worship the icon at the humble church of Agia Pelagia was palatable and then when all the procession had ended the icon was hiked onto the backs of four young strong men for the hike up the winding road from Pelagia to Potamos. The carriers constantly change as the strain is huge but the sense of community is tangible, if we can only convey that unity into maintaining Kythera industrial zoning free, meaning windmill free, maybe we would hear the reeds.
. 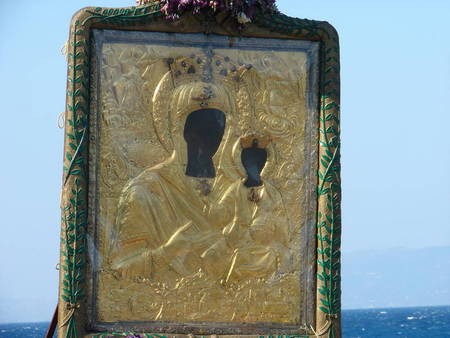