Culture > Blogs > 52 Weeks In Tsirigo - Just What the Doctor Ordered

52 Weeks In Tsirigo - Just What the Doctor Ordered

One major characteristics that makes time spent on Kythera at the same time divinely fulfilling and other times bust-a-blood-vessel irritating, is that the classic time-line as is understood in the western world corkscrews here…….it is not linear it is circular….and at times lunar or lunatic. The seas, nature and winds which directly affect all elements of local life are cyclical and so it is only natural that peoples sense of time is kind of off-kilter compared to urbanised folk.

So it is that the island has entered one of its frenetic periods as the summer is truly upon Kythera. It appears as if the locals are scrambling to bear witness to the speedy changes occurring on the island. While Kythera Summer Edition Publisher Sia Poulos, artist Daphne Petrohilos and I have been focussed on putting the finishing touches on the 2008 Kythera Summer Edition and the creation of a KSE website, last Friday was a particularly arduous day, jam-packed with activity.

After cracking through writer’s block on one this year’s feature stories, it was off to the official ceremony of the laying of the foundation stone of the New Hospital.
The prospective hospital is to be located near the Monastery of Ayios Theodoros (on the main road between Aroniadika and the Lialianika turn-off. The political back-slapping was given serious kudos with charismatic Health Minister Mr Dimitri Avramopoulos (think Bill Clinton with his fly done-up) performing the stone-laying duties…..live on Kythera soil (bring on the razzamatazz)

The 14 stremata land was generously donated by the Mitropole of Kythera (Local Churches) with the co-operation and enthusiasm of the Mitropoliti (head of Local Churches in Kythera) contributing to the rapidness of the project. The EU-funded hospital which has to be completed in 14months (good luck) also confirms that plans are ahead to decentralise large numbers of people from the cities to
the periphery of Greece, which is also coincidently the periphery of Europe’s borders.

First cab-off-the -rank of formality was the Mitropoliti himself who along with several local priests performed a blessing. Various men in suits choked with emotion
as they spoke, making way for the big-gun himself……………..Mr Dimitri Avramopoulos who mentioned that Kythera was entering a new-age, and that we should tell our Kytherian-Australian relatives to love Kythera (Phew, I wasn’t sure how I felt about the place).

Comedy relief was on offer when a smiling Avramopoulos placed the marble plague on the slant on the stone-built pedestal and it began to slide. Thankfully the observant and experienced Yiannis Vlakras cried out to the dignitary “Dimitri, vre Dimitri piasto!” saving the day.

Once the hoohaa was over, it was onto the Zeidoros Ampi-theatre in Kapsali for the Community Concert featuring London’s Late-Starter Orchestra, the Children & Adult choir from the Anagenisi Music Academy, the Kytherian Philarmonic Band and local Rebetiki musicians. Local composer Panayiotis Lefteris created a striking piece of original music for played by all the participants and the audience of more than 200 enjoyed the summer night ablast with music.

Will the threat of those flamin’ windmills ever cease???? Well here is your opportunity to demand the local council of Kythera to behave with democratic practice and undertake a full environmental impact statement and allowing the residents to decide the matter. If you feel directly implicated by such development
Please click thru to the on-line petition and forward it on to your networks of Kytherians and Kythophiles alike. And let’s put down our collective cyberfoot!!!!
http://www.PetitionOnline.com/mod_perl/signed.cgi?kythera&1 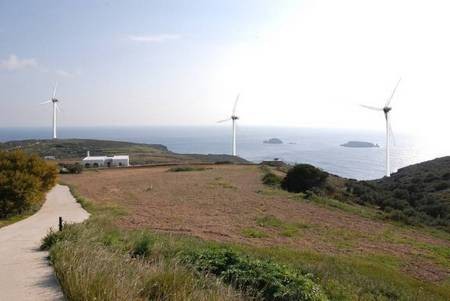