Culture > Blogs > 52 Weeks In Tsirigo - The Land That Time Forgot

52 Weeks In Tsirigo - The Land That Time Forgot

I am writing this edition of '52 Weeks In Kythera' blog from distant Athens as there is NO BOAT for me to return to the island. That's right folks the island has been without any sea- connection for close to a week. Yes, Olympic 50 seater airplanes.......... but no boat.And not just from Athens but from any mainland connection. It seems incredulous that the people are currently crossing from the island to the mainland in fishing boats- it the year 2008! But that is the reality that hundreds face, as we 'celebrate' the beginning of Kythera's 'tourist season', this June long-weekend. Throughout history Kythera, much like Timbucktu, has been impossible to get too. In Rennaisance times the island was revered as an unobtainable utopia, (check-out Watteau's Enbarkment To Kithira) and French and English dandies dreamed of the shores Romantic birthplace of Aphrodite. Recently I joined a fascinating excursion* to the various archeaological sites in Kythera and through the expertise guidance of the archeaologists leading the tour, story after story confirmed what I had already suspected - Kytherian meekness and the divisiveness of locals has been the island's 'achilles heel'. While today this passiveness is very evident in Kytherian local culture it doesn't appear so present in diasporic Kytherians But considering the numerous colonial powers that have 'camped-out' in Kythera throughout the island's dramatic history, it is somewhat understandable why subservience is so embedded in the local Kytherian experience. But as with anything swallowed and not absorbed, this lack of unity is now errupting open. It is desperate times on Kythera as the isolation from the lack of boat services and the heavy-hand of law enforcement have created a 'hostage' atmosphere. Always the bridesmaid and never the bride is the best way to sum up the atmosphere of Kythera as it goes into overdrive for the eager arrival of cashed-up tourists (who will be politely referred from here on in as....visitors). And you couldn't really have a Kytherian (hypothetcal) celebration, without the presence of some twisted-family member that you had to (unwillingly) invite. Let's re-cast the 'undesirables' as 39 Police officers who have descended on Kythera in the past two weeks and have gone hog-wild booking everyone for absolutely everything. (I hope that breathing fresh clean air is covered under the Kyoto agreement). But why all the 'fuzz'? Could it be a political distraction from the windmill saga, but if so why would they be booking the Vlakras Cement Trucks? Could be a last-minute dash to draw Euros into the Greek Economy, so the almost bankrupt Greek State has Euro cash for foreign exchange. Could it be something more sinister..... Could it be September 12? Could the objective be to inspire 'Fear & Chaos' into a tiny community watch it boil over?, a sort of human experiment. (OK so I don't have a TV and my imagination maybe be a bit too fertile) It is most likely the current 'sting' is because the 'local lads' can't actually enforce 'The Law' on their all too familiar neighbours. Is that why we don't have a boat....so no-one escapes ? While humbleness has its limits, Kytherians are (belatedly) seizing the moment and a demonstration has been called for tonight, outside the Local Council Chambers in Chora. The Police-hit squad will soon pack up their circus-tent and take their sell-out tour to other 'lucky' lands. We will one-day (soon) have sea-connections but my instinct tells me we will still have a faint case of the 'Patty Hearsts' where the hostage aligns themselves to the enforcer and the bullying politically, socially and spiritually continues. After 9 months straight on Kythera, it has been a relief to breathe smog, see films, go shopping and not know every person walking past me in the street by their 'paratsoukli' (family nick name). I have also just begun a lengthy Greek to English translation of respected photographer/writer Tzeli Hadjidimtirou's comprehensive guide-book Unexplored Kythera & Anti-Kythera (published by ROAD editions, Greece equivalent to Lonely Planet). The 350 page guide book,loaded with amazing photos of the Kythera & Anti-Kythera is to be officially launched tonight at the impressive new Benaki Museum. Fingers crossed my next blog will come from the shores of Kythera................ To check out Tzeli's work and a gallery of photos from UNEXPLORED KYTHERA & ANTI-KYTHERA click thru to http://www.odoiporikon.com 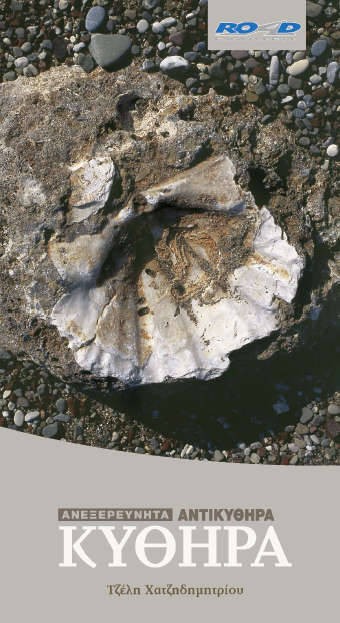