It’s a moody Kytherian autumn turned wintery day on the shores of Agia Pelagia. Looking out the pass between Cape Maleas and the island with surf chundering massive white waves, another ship has come and run ashore in Diakofti. (see photo). Symbolically the Christian D has come to rest on the islet off Diakofti, reminding that you only need to take your eyes of the wheel briefly before it all goes skew-whiff.

There is a chilly stillness here in the air before the wild chaos that is about to unleash. Greece is leading into local council elections and for the first in decades Kythera is host to three local tickets: the conservatives, the ever-so slight left of the conservatives and a young local progressive ticket that seems humanist and concerned with addressing local issues.

There is no denying that time is speeding up even in Greece, and while those in power make a desperate effort with blue and white stained hands-tied behind their backs, in a sudden death play-off game of not defaulting and retaining Greece’s sovereignty, we are in period of resolution, a case of housekeeping but with an empty sense of satisfaction. This week Epaminondas Korkoneas, the policeman who shot dead 15 year-old Alexis Grigoropoulos almost three years ago, sparking the Athens riots and has been sentenced to life imprisonment check http://www.bbc.co.uk/news/world-europe-11513309

But even so this sentence doesn’t seem to bring any sense of justice or a return to yesterday as Korkoneas is the father of three young children. The 2008 Athens riot now mark a point of no return, for the Greece and the world. To say corruption is rife is an understatement. Even in Kythera the gap between the have and have-nots is growing with the economic worker migrants really in a vulnerable place.

Whispers are getting louder, that Old People Home in Potamos is about to be scaled back and its forced closure eminent. A demonstration was recently held by workers made redundant, outside the Old People’s Home. It seems that Athenian- Kytherians are just not comfortable with retiring in Kythera. And why would they be who would they recite poetry with, listen to Opera and of course bang-on about politics with, who would visit them. When Kytherian ‘powerbrokers’ pledged on behalf of the island population that we needed a Retirement home in Kythera, they meant for their parents. Not for them! Amassing endless estates and going as far as contesting wills in Queensland Australia and New York USA, it now appears the fickle Triffyleio Foundation is keen to move on…under the guise of a Kytherian-centric identity.

And as history is revised, the Christian D lies roughly three hundred metres away from the now famous Nordland ship-wreck. While it is uncertain why the recent shipwreck occurred, the fact that the Christian D lines up with Cape Maleas gives credence to the insinuation that the crew had the ship on autopilot. Much like the Greek State. 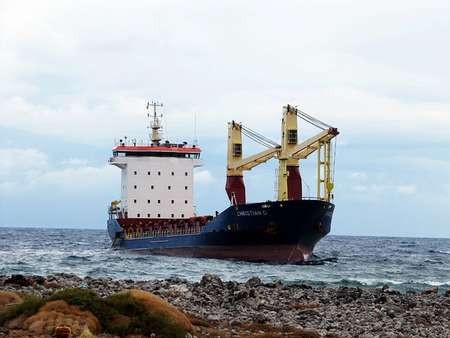