Seeking to draw urgent attention to the lack of operations of the Town Planning Department, which is not even accepting building submissions let alone applications, unwittingly drawing a halt building on the island and leaving hundreds of families with no income.

The huge economic and social repercussions of a sluggish building industry are widespread. Kythera basically has three industries not reliant on public service: tourism, farming and building and cannot afford to lose such a vital industry.

Background
Since the last local elections every local council in Greece has been undergoing a transition between the Kapodistria model of Governance to the new model of Kallikratis Governance. The Town-Planning Office that, until the last day of 2010, had jurisdiction over Kythera is the based in the Prefecture of Peraia. The other islands in the same situation have created a local Town-planning branch within their local council.

While both right and left-wing representatives have attempted to draw attention to this spiralling situation, the move to unite as an industry and have their issues heard is unprecedented on the island. The changes in the already understaffed Office of Peraia branch of Town-Planning, has seen their staff of 60 slashed to 30. The dysfunction of the department includes the non-existence of the Architectural Committee, which approved all Kytherian building applications. This inaction is heightened by the absence of Town Planning Department support staff and managers.

“To put it bluntly it’s a shit-fight and the black hole is getting deeper,” explains Theodori Kominos, a fitter & turner. “It’s as if they have closed shop, they say they have delegated public servants for each region but when we attempt to contact them direct they won’t even take our calls,” adds architect Domna Kontaratou.

Local businessman Vassilis (Kaloulas) Cassimatis of Karvounades is a second generation merchant specialising in paints and wood supplies as well as building materials. In 2010 he saw his business transactions slashed by 50%. Thoughtful and articulate Vassilis explained the situation clearly: the transition from Kapodistria to Kallikratis will obviously have its hiccups but we need the local council to take a pro-active role on this issue. In the short-term we need the local council to represent this issue and in the longer term to commit to opening an office in the local council. This issue affects all the island and there is no household that is not touched by this situation.”

As Kythera’s building industry drags to a snails-pace, several builders currently still have work as builder Vassili Kalligeros from Chora explains “If the house next-door to you is burning down, odds are your house will burn down too”


Outcome from Friday 28 Jan 2010
The local Council called an extraordinary Council meeting and decided without dissent, to support the building movement.
1) 5 days closure of the Local Council in show of support. This will include a picket line of the Chora’s main council office and picket-line of the Potamos branch.

2. Kythera’s local council has agreed to create and release a media campaign to all Greek media highlighting the burgeoning problem.

3. A delegation of the Mayor, the Deputy Mayor and the Opposition Leader to travel to Athens to represent this cause, to higher offices.

On Saturday night 29 January 2011, it was agreed by all in the Potamos Cultural Centre, that a pan-kytherian demonstration will go ahead during the week and that legal advice is being sought as the uselessness of a public body such the office of Town Planning, overrides the Constitution. 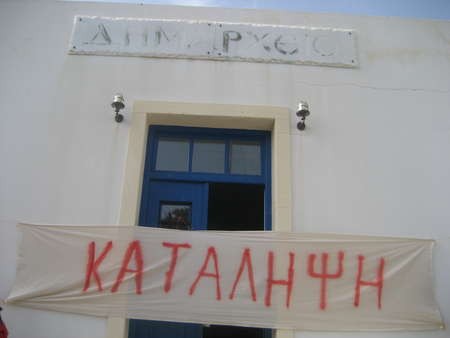