Culture > Current Affairs > After winning the year's best film by the National Board of Review, Mad Max: Fury Road is lining up for Oscar nominations

After winning the year's best film by the National Board of Review, Mad Max: Fury Road is lining up for Oscar nominations


As a new poll suggested it could receive a swag of Oscar nominations, Max Max: Fury Road has been named the year's best film by the National Board of Review in the US.

While the Board of Review, which draws on votes from 120 film fans, is not considered a predictor of Academy Awards results, Fury Road's win backs up the support it is receiving for six, seven or even eight Oscar nominations next month.

While Cate Blanchett is a virtual certainty for another nod next month, the latest predictions of Oscar pundits on the well-regarded Gold Derby web site suggest Fury Road could continue its success at the Australian Academy of Cinema and Television Arts Industry Awards this week.

While it is still almost a month before voting opens for the nominations and Hollywood's Oscar experts are yet to see some films, including Star Wars; The Force Awakens, there is surprisingly strong support for Fury Road in the behind-the-scenes categories.

To no-one's surprise pundits from such publications as Variety, Vanity Fair, USA Today, Entertainment Weekly and Rolling Stone.are almost unanimous - predicted by 20 out of 21 - that Blanchett will receive her sixth Oscar nomination for the lesbian romance Carol. She has previous wins for Aviator and Blue Jasmine.

But there is just as much support - 20 experts out of 21 - for Fury Road's John Seale being nominated for best cinematography. A previous winner for The English Patient, he has also been nominated for Witness, Rain Man and Cold Mountain.

Almost as many experts - 19 out of 20 - believe Fury Road's Colin Gibson will get an Oscar nomination for best production design.

An overwhelming majority - 18 out of 20 - also believe Margaret Sixel will be nominated for best editing.

And while it was beaten at the AACTAs for best costume design by The Dressmaker, a fair number of experts - nine out of 20 - believe Fury Road's Jenny Beavan will get a nomination too.

But there seems to be no doubt when it comes to the two sound categories- sound editing and best sound mixing. 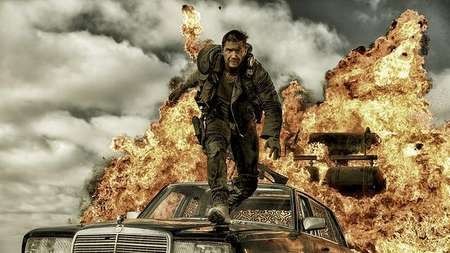 And an overwhelming number believe Mad Max will also get nods for best visual effects (15 out of 18) and best make-up and hairstyling (18 out of 19).

It is an excellent chance of adding best film and director at the main ceremony on December 9.

While Oscar voting does not open until the end of the month, the poll suggests Fury Road will be surprisingly prominent for a film released seven months ago when the nominations are announced on January 14.

In an entertaining twist, Tom Hardy, who took over as Mad Max from Mel Gibson, is considered a strong chance of an Oscar nomination as well - as predicted by 11 experts out of 21 - but for his supporting role in Alejandro Gonzalez Inarritu's western epic The Revenant.

One of Australia's greatest directors, Miller's record at the Oscars includes a best animated feature win for Happy Feet and three other nominations - best screenplay (with Nick Enright) for Lorenzo's Oil and, for Babe, best picture (with Doug Mitchell and Bill Miller and best adapted screenplay (with Chris Noonan).

He has just scattered support for a best direction nomination for Fury Road (three experts out of 22), as there is for a best picture nod (four out of 21).

But that won't dampen the enthusiasm of a crew that took 12 years - overcoming countless setbacks - to bring Mad Max back to cinemas.