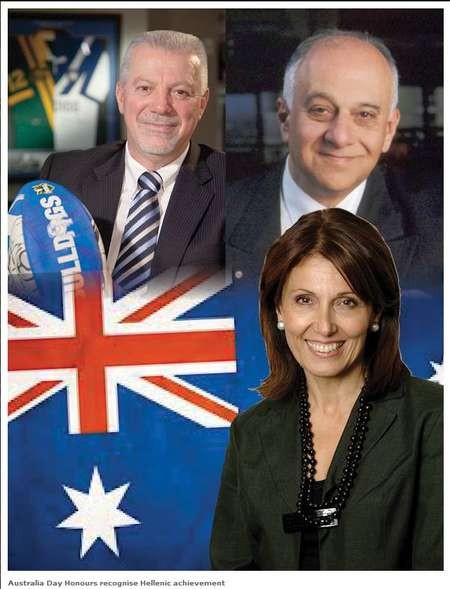 The eleven awards reflect a diversity of practice within the Greek Australian community - from business and community leadership to international trade; from achievement in medicine to the development of public policy; from services to sport and cultural life, to matters of faith and the Greek Orthodox Church. All celebrate outstanding contributions to improving the lives of others.

In total, 571 Australians are receiving Australia Day awards in the general division of the Order of Australia.

Governor-General, Her Excellency Quentin Bryce AC CVO - who approved the 2013 Honours List - said that the awards "heighten our respect for one another, and they encourage Australians to think about the responsibilities of citizenship in our democracy.

"Awards in the Australian honours system represent the highest level of recognition accorded by our nation for outstanding achievement and service. The Honours announced today recognise community values and celebrate what is important and unifying in Australian life," said Ms Bryce.

Air Chief Marshal Angus Houston AC AFC (Ret'd), Chair of the Council of the Order, said the diversity of service across all fields of endeavour was recognised in the Australia Day Honours List.

"These awards are public recognition of people who provide outstanding community service and whose achievements enhance national identity.
"By their actions they demonstrate the qualities of positive role models. The recipients are not only worthy of respect but encourage emulation. These awards also recognise the 'quiet achievers' in our midst. They are people who serve the community, but do not seek accolades," Air Chief Marshal Houston said.

"The Order of Australia relies entirely upon community initiative for submission of nominations. It is important that the honours system continues to uphold the national ethos of valuing diversity and recognising the contributions made by citizens to Australian cultural and social life, regardless of background," he said.

Mr Nicholas Begakis told Neos Kosmos that he was "surprised and humbled" by his award.

"Given my Greek heritage, the sort of values my parents instilled in me, were those of community service - that one gets involved and puts one's hand up. That was natural," said the Adelaide-based business leader.

Speaking from Canberra, Reverend Father George Carpis - parish priest of St Nicholas' Greek Orthodox Community between 1962 and 2011 - said that he wished to dedicate his award to his wife and the many people in the ACT that he had worked with over 50 years.

Quiet-achiever George Lazaris, former President of the Cyprus Community of New South Wales and famous in Sydney's Maroubra suburb for helping others over more than 40 years, said that the award was totally unexpected.

"It's great to hear this news. I don't know who nominated me, I have my suspicions, but I don't know for sure. I never expected anything back."
Mr Panayiotes Yiannoudes - who has been honoured for his work in Greek and Cypriot community organisations - said that whilst he felt honoured to be given an Australia Day award, he neither sought nor expected accolades for his work in helping others.

"You must give to the maximum of your efforts, we live in a society where we must not expect just to receive but to give as well," said Mr Yiannoudes.

Cancer specialist Professor Helen Zorbas receives an award for her distinguished service to public health. Professor Zorbas told Neos Kosmos that she felt, "extremely honoured and privileged" to be included in the 2013 Honours List.

"This is the ultimate recognition for any Australian to receive, recognising a contribution to the fabric of the country in some way. To be counted amongst those people is very humbling," said the Sydney-based professor.