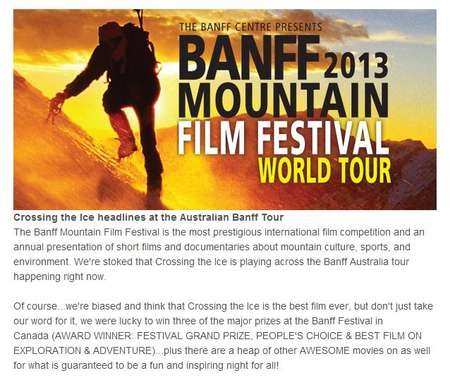 In January 2012 *Cas and Jonesy made history, being the first to walk unaided to and from the South Pole. Covering 2275km over 89 gruelling days, they battled sub-zero temperatures, freezing polar winds and deep snow.

Crossing the Ice headlines at the Australian Banff Tour

The Banff Mountain Film Festival is the most prestigious international film competition and an annual presentation of short films and documentaries about mountain culture, sports, and environment. We're stoked that Crossing the Ice is playing across the Banff Australia tour happening right now.

Of course...we're biased and think that Crossing the Ice is the best film ever, but don't just take our word for it, we were lucky to win three of the major prizes at the Banff Festival in Canada (AWARD WINNER: FESTIVAL GRAND PRIZE, PEOPLE'S CHOICE & BEST FILM ON EXPLORATION & ADVENTURE)...plus there are a heap of other AWESOME movies on as well for what is guaranteed to be a fun and inspiring night for all!