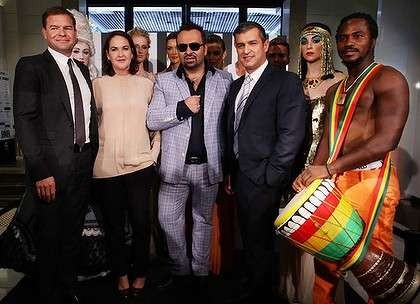 All dressed up ... Napoleon Perdis (centre, in sunnies) with DJs chief executive Paul Zahra to his left.


MAKE-UP mogul Napoleon Perdis is a steadfast believer in the might and majesty of the department store model, it just needs a facelift to better serve the needs of younger and smarter shoppers and work at creating the kind of in-store events that the internet can't match.

The Australian fashion leader who has made it big in the US argues leading department stores such as David Jones and Myer need to let go of their uniformity strict formats to transform into a ''mall'' where brands are given the floor space to show off their artistry and design.

''I think there is a place for department stores but they need to think of themselves more as malls, where vendors can create experiences within that mall model,'' Mr Perdis said.

He should know. From his first Napoleon Perdis store in Oxford St, Paddington in 1995, the cosmetics entrepreneur has built an empire to today have 75 company-owned concept stores and eight Napoleon Perdis Makeup Academy campuses in Australia and the US, and more than 4500 stockists and distributors in Australia, New Zealand and the US.

Napoleon Perdis is now in Target, Ulta, Dillard's and Nordstrom in America and a popular fixture of America's king home shopping network QVC.

Some of the pizazz Mr Perdis argues Australian department stores are in desperate need of was on show last week when he staged a lunchtime event at David Jones' flagship Sydney store in Elizabeth Street.

''There were a couple of thousand people on the floor watching, waiting for the entrance and I gave them a whole show,'' he said. ''There was Madame Pompadour, there was Cleopatra, a slave, a naughty couple, a romantic couple, it was sexy, it was fashion.

''Eventing needs to be created in its true form where creativity is allowed to flow like in the days of the 1950s, '60s and '70s where there was enormous creativity inside department stores. Like Andy Warhol, who would do windows in Barneys, they would be show-stopping. These days they do windows and its all so 'where's the art?' ''

Napoleon Perdis was lured to David Jones from Myer by the former DJs boss Mark McInnes and now sells exclusively in that store and has a range in Target and Big W.

''Australia for me is in growth mode, both in my prestige brand and my mass brand, but the reason for that is that I work really actively in creating that experience,'' Mr Perdis says.

He applauded the David Jones' boss, Paul Zahra, for his strategic plans to reinvigorate the store, invest in staff and online.

''There is still a place for retail distribution. She [the customer] still wants to go in and experiment and have it applied on herself. She can do some replenishment online but to look at newness etc, you can't do it all online,'' Mr Perdis said.

''The retailers or department stores that will be left out will be the ones that don't put the infrastructure in now and start pushing their marketing teams to better communicate.

''They have been caught up in sales war and that doesn't do anything, it kills business; it brings in a customer that may not necessarily be able to afford to come back to you.''