George Miller’s epic film Mad Max: Fury Road has been crowned the best film of the Australian industry’s biggest year at the box office since the 1990s.
The action-packed revival of Miller’s 1970s franchise took out the AACTA Award for Best Film at the Australian Academy of Cinema and Television Arts’ star-studded ceremony on Wednesday night at The Star Event Centre in Sydney.
Having already scooped awards for Cinematography, Sound, Music Score, Editing, Production Design and Visual Effects at last week’s craft awards, Mad Max: Fury Road, which starred Tom Hardy and Charlize Theron, took its total tally to eight AACTAs when Miller was awarded Best Director.
The 70-year-old Miller had fought for years to get another Mad Max movie off the ground — Fury Road eventually had to be shot in Namibia after drought-breaking rains turned Australia’s red desert sands green.
But while the post-apocalyptic blockbuster was largely shot overseas and backed by Hollywood studio Warner Bros, it qualified as an Australian film thanks to its director and funding from local bodies. 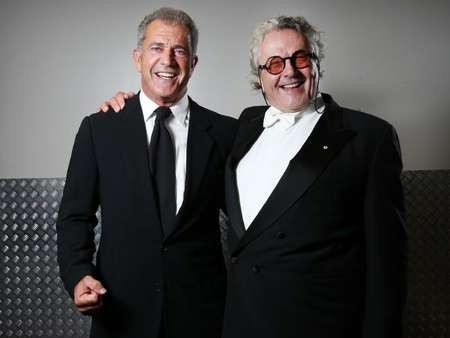 The original Mad max ... Mel Gibson with George Miller at the 2015 AACTA Awards held at The Star in Pyrmont, Sydney. Picture: Richard Dobson

Miller was given his best director gong by his original Mad Max, Mel Gibson, who is back in town to make his film Hacksaw Ridge.
He seemed genuinely thrilled to present the award to his old colleague.
“Oh hey, it’s George,” he said as he opened up the envelope. Miller praised his Mad Max: Fury Road crew saying “this wasn’t an easy film to make”. 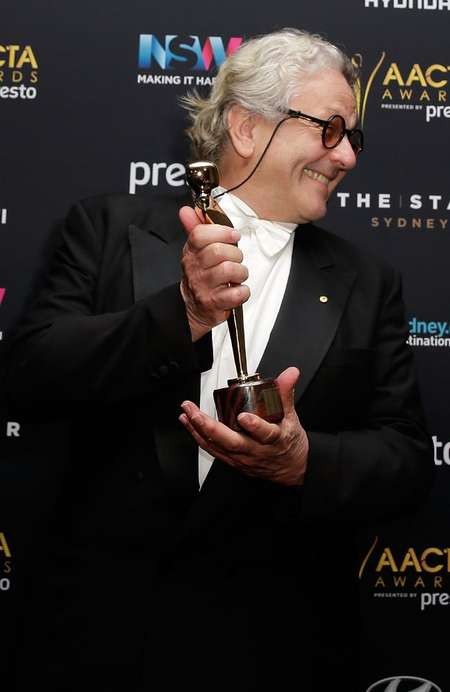 Smaller films shined in the AACTA Awards’ acting categories, with The Dressmakerstar Kate Winslet named Best Lead Actress and castmates Judy Davis and Hugo Weaving claiming the Supporting Actor gongs.
Englishwoman Winslet winning over Charlize Theron’s Mad Max performance may come as a surprise to some, with the South African-born star currently featuring prominently in Oscars predictions over in the US.
Winslet recorded her very funny thank you speech for Best Lead Actress in a feature film from overseas.
“They said I ought to put something together on the off-chance I might win this award. But I’m sure I haven’t because it should go to a local and I am indeed an outsider.
I did put on lipstick just in case. I loved being a part of The Dressmaker. Thank you.”
Unsurprisingly, The Dressmaker stitched up the People’s Choice Award for Favourite Australian Film — Aussies have delivered the Victorian-shot film over $16 million in ticket sales so far.
Meanwhile, Aussie stalwart Michael Caton was recognised for a performance that spanned comedy and moments of heavy drama, winning Best Actor for his role as a taxi driver diagnosed with only months to live in Last Cab to Darwin. It was his first AACTA award.
Cate Blanchett called for more of the country’s actors on screen as she tearfully accepted one of the highest honours in the Australian film industry.
As had been announced, Blanchett was given the Longford Lyell Award for an outstanding contribution to Australian screen by actors Richard Roxburgh and Hugo Weaving.
“Oh I’ve become one of those ridiculous people who cries it’s just a [email protected]#ing award,” a teary Blanchett said as she accepted the gong.
A cavalcade of Hollywood directors, including Martin Scorsese, Ron Howard and Robert Redford, delivered video messages congratulating Blanchett.
Blanchett said that more Australian actors should be cast.
“It’s not a quota ... it needs to be fought for,” Blanchett said.
She also acknowledged how happy she was the award she received had had a name change to include Australian 19th century actress and film producer, Lottie Lyell.
“Thank you for recognising Lottie Lyell,” she said.
“I think it’s fantastic AACTAs is coming into the 21st century,” she said in a nod towards gender equality, as the film industry works towards having 50/50 gender equity in upcoming Australian projects.
Backstage, Blanchett said the Australian industry needed to be celebrated for being small and unique, and it should stop trying to emulate other industries around the world.
“I love this industry so deeply and am so very proud to be a part of it that it always pains me so much that we talk ourselves down,” she said.
“We are a small industry and that’s a virtue, I think it makes us unique.”
Directors Ridley Scott and Martin Scorsese both lamented the fact they’d only had the chance to work with Blanchett once and would love to do it again. Robert Redford also paid Blanchett a great tribute.
“You are brilliant and you do honour to your craft,” Ron Howard said.
The director of her upcoming film Carol, Todd Haynes, called the actress “a beacon, a galaxy and a mensch.”
The AACTA Awards’ TV categories were dazzled by Channel 7’s Peter Allen — Not the Boy Next Door, which sang and danced its way to seven statuettes.
That haul included Best Actor awards for the two Peters: Jackson for his Lead role as the grown up Allen and teenager Ky Baldwin for his Supporting work as the young Allen.
Sigrid Thornton’s transformation into the legendary Judy Garland was rewarded with the Best Supporting Actress AACTA.
Not the Boy Next Door was also named Best Telemovie or Miniseries.
Ten’s repackaged MasterChef Australia won in a crowded Best Reality Series category, while the ABC’s new series Glitchwon Best Drama ahead of more experienced and fancied rivals Wentworth, Miss Fisher’s Murder Mysteries and Love Child.
Pamela Rabe’s consistently terrifying character The Freak in Foxtel drama Wentworth won her Best Actress.