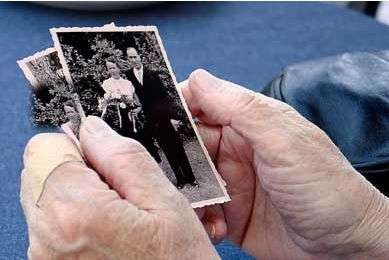 Greece’e first memory bank (www.bankofmemories.gr) dusts off tales from old diaries, faded photographs and near-disintegrated documents to build a narrative of small everyday stories and seminal events from World War II that have shaped the country’s history and its people, creating a depository for future generations.

In one videotaped interview, Lilly remembers the Greek theater troupes that traveled through Constantinople -- true aficionados, she and her brother never missed a show. Penelope can still see the smile cast by a young Italian soldier leaving Ithaca when she was a young girl, and Mimikos tells the tale of a day that changed his life forever: traveling on a Dakota military transport aircraft together with another 12 passengers to South Africa in 1947, away from war and on to a new future.

The Greek Bank of Memories, which joins the efforts of international nonprofit initiative the World Memory Project, was started last year by Marina Sarli, an Italian who lives in the country and has come to feel very much a local.
“When I first entered Memoro, the Italian memory bank’s site, I watched videos for a whole week,” she told Kathimerini. After her grandmother passed away shortly afterward, she thought that she would like to do something similar in Greece.
“I thought that my daughter, who had just been born, would never hear the stories that my grandmother used to tell me, stories that are true lessons about life,” said Sarli, adding that she pitched the idea to three of her friends, who jumped on board at once.

Initially, Sarli and her partners in the endeavor began by interviewing and filming relatives, friends and acquaintances all over Greece who were born before 1950, uploading the videotaped interviews on the website. As the site began to gain popularity and fans, stories and testimonials started coming in by themselves.

“Anyone can record an interview and upload it onto the site, just as you do with YouTube,” explained Sarli, saying that she and her friends began collecting stories last fall and have now gathered a total of 70 videos that are currently being edited.
“The experience is amazing. Many of the elderly people we speak to have few friends left. They spend two or three hours talking about their lives and this seems to lift their spirits. Many tell us that they feel touched by the experience because they hadn’t thought that anyone would care to hear their stories. Sometime they ask us to stop recording so that they can talk to us about more personal experiences, about old love affairs, well-kept secrets or some dark moment in their lives,” said Sarli.

Trying to raise more interest in the project, meanwhile, volunteers of the Bank of Memories recently visited a high school in the Athens suburb of Ilioupoli to talk to students about the project.

“A study by the Education Institute showed that 60 percent of pupils hate history and cannot understand why it is relevant to their present and their future. Speaking to the children, we explained that history was composed of the stories of their grandparents, we tried to show them that the war is deeply rooted in the people who experienced it and that the hardships of the past are lessons of the present,” said Sarli.

The volunteers succeeded in drumming up so much enthusiasm in the students that a number of them are currently in the process of badgering their own elderly relatives for interviews about their memories.

Like the World Memory Project, the Greek Bank of Memories is currently focusing on videos and documents containing details about victims of the Holocaust and Nazi persecution and occupation during World War II.