Culture > Current Affairs > He has trekked to the South Pole, but James Castrission is shaping up for the big adventure - marriage.

He has trekked to the South Pole, but James Castrission is shaping up for the big adventure - marriage. 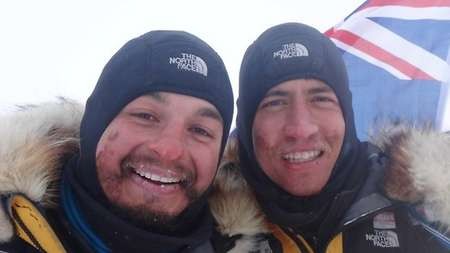 TRIUMPHANT: James Castrission, left, and Justin Jones at the finish line of their South Pole trek.

Mr Castrission, 29, was greeted by his ecstatic fiancee Mia Ballenden at Sydney Airport yesterday, as he returned home with Justin Jones, 28, following their world-first Antarctic adventure.

The pair endured extreme physical, emotional and mental exhaustion as they trekked more than 2200km from the Antarctic coast to the South Pole and back, unassisted.

But even during the toughest parts of his journey Mr Castrission said the wedding had never been far from his mind since leaving his north shore home.

"Marrying Mia is something I have been dreaming about for years," he said.


"The whole time (I was) out there I couldn't stop thinking about it and now the time is finally here and it's going to be even better."

Ms Ballenden, 29, held her hands to her face as Mr Castrission appeared with matted hair, a beard and 25kg lighter at the arrivals gate.

Mr Jones, who will be best man at Mr Castrission's wedding in three weeks, lost 30kg after the pair was forced to reduce rations. He has since regained about 8kg.

Thankfully, the adventurers are yet to be fitted for their wedding suits.

Mr Jones said that the expedition was the closest he and Mr Castrission "have ever come to the edge".

It took 89 days to achieve their goal and both men experienced hallucinations and injuries as sleep and nutritional deprivation each took their toll.

"For three months we were down in Antarctica just dreaming of this moment and actually walking through the airport is a little bit surreal," Mr Jones said.

The expedition raised $50,000 for You Can charity.