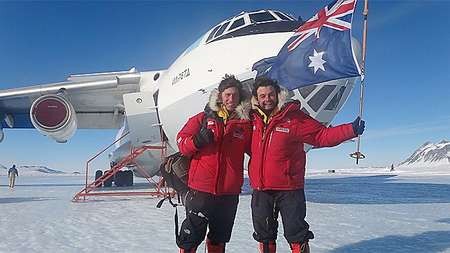 A PAIR of die-hard Australian mates who spent 89 days trekking the wilderness of Antarctica have said they wouldn't have wished the experience on their worst enemy.

Justin "Jonesy" Jones and James "Cas" Castrission have revealed that despite completing their world first return trip across the ice without support on Australia Day, the plane that was due to pick them up had to abort a landing due to bad weather – leaving them on the icy continent for the public holiday.

Snowfalls and tough conditions on the outset of their journey put the two behind schedule and saw them return on half rations as they lost 56kg between them.

The duo travelled 2,200 km in their trip from Hercules Bay to the South Pole and back in an incredible epic in freezing -30C conditions through icy winds blasting at up to 70km/h that saw them ski more than a marathon a day (over 52km) on the return trip in a race against their rations.

"The toughest time was day 29 and 30" Mr Castrission said.

"Two feet of snow was dumped on us, we were lucky to make 10km a day, our food reserves weren’t looking good and I had a nasty skin infection that stopped me sleeping.

"It was just a matter of focusing on the next day, and when that got too difficult on the next hour."

But it was the return trip that tested Mr Jones most.

“The half rations were really getting to us, we were doing 13 hours a day with only a short break,” he said.

But the journey that began on October 30 last year will be their last for a while as the two focus on creating a documentary and a book about the experience – before convincing Mr Castrission’s soon-to-be-wife to let them go on their next trip.

Cas and Jonesy previously became the first people to paddle from Australia to New Zealand and have provided their tips for everyday Australian’s to get a bit more out of life by challenging themselves to a trek.

But with their fingers still to thaw from their Antarctic expedition they have advised against tackling the southern continent.

"There were moments out there when I wouldn’t wish that on my worst enemy," said Mr Jones. Their tips include:

• Don’t give in to your bodies desire to give up – we can push past incredible barriers;


• Prepare and plan and make sure you factor in your safety at all times;


• Don’t look too far ahead – you will want to throw in the towel;


• Break your journey down by days, hours and even the next 15 to 20 steps if you have to;


• Include people in your life even if they don’t understand why you’re doing it – don’t alienate yourself from them;

Their journey was also made possible by advances in technology that allowed them to bury supplies as they travelled towards the pole and retrieve them on the return journey as their rations dwindled.

Using a Garmin GPS MAP 78CS the two marked the locations of their stashes and put their lives in its hands to guide them back to it.