Culture > Current Affairs > John Wood, one of the Patrons of the Roxy complex, Bingara

John Wood, one of the Patrons of the Roxy complex, Bingara

has a portrait of him by Raelene Sharp, win the "Packing Prize" in Sydney. John is known in the Kytherian community as Yanni Ksilo 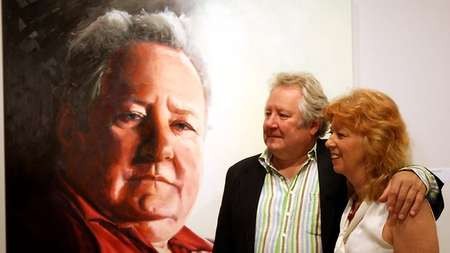 Australian actor John Wood may be a self-declared "has-been" but his portrait has taken centre stage in the lead up to the Archibald Prize.

Head storeman Steve Peters announced the winning entrant on Thursday and invited Wood and Sharp on stage to accept the prize of $1,000 and a $500 ANZ debit card.

"I think it's wonderful that a relatively unknown painter, painting a portrait of a has-been, has managed to win such a prestigious prize," Wood told reporters at the gallery on Thursday.

He said despite feeling an unworthy subject for the annual art prize, he was flattered to be chosen by Ms Sharp.

"Im not exactly the world's most handsome man," he said.

But that may have been exactly why Ms Sharp selected the man most famous for his role as Blue Healers Sergeant Tom.

"I guess (handsome) would be boring, you've got to have all that character, don't you? That's what it's about," Ms Sharp told reporters.

"His face is just so well known, he's such an icon in Australian theatre and television."

The Packing Room Prize is selected by gallery workers but the most influential say comes from head storeman Mr Peters who controls 51 per cent of the vote and usually gets his way.

"The workers know better than to argue with me," he told AAP on Thursday.

"The work has to be good, which knocks-out about 95 per cent of them."

But the portrait the workers pick as the best has never gone on to win the Archibald Prize, judged by the Art Gallery of NSW's board of trustees.

"Maybe they (the trustees) haven't ever picked the right one," Peters said.

Forty-one finalists for the Archibald Prize were announced today, with last year's Packing Room Prize winner Vincent Fantauzzo in the running with a portrait of up and coming Melbourne singing-talent Kimbra.

Last year's Archibald winner Ben Quilty is also back to defend his title with an abstract portrait titled Captain S after Afghanistan.