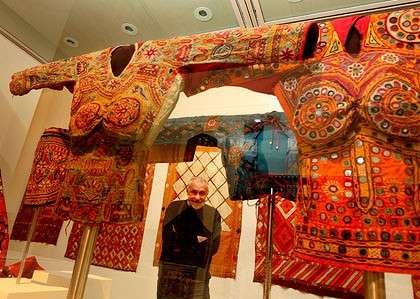 Gift to NSW ... Jim Masselos with some of his large collection, which includes colourful embroidered textiles. Photo: Ben Rushton

Dr Jim Masselos has sat in the dust with Indian peasants and supped with a Maharani.

Along the way the Sydney historian has amassed one of the biggest but least known collections of Indian art in Australia.

Bright embroidered textiles, posters of Hindu gods and photographs of moustached soldiers from the Raj are among the thousands of items Masselos is donating to the Art Gallery of NSW.

Masselos did not set out to be a collector. Even now he scratches his head at how the collection has grown to fill almost every cranny of his home. 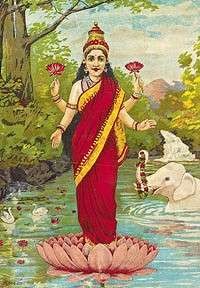 Standing Lakshmi ... an 1894 lithograph of the goddess

He began acquiring old photographs to help his research into 19th- and 20th-century Indian history. ''It was hard at the beginning to visualise the places,'' he says. ''I got interested initially in digging out old photos and prints purely to help this. When I began, much of this stuff wasn't easily accessible.''

He bought photograph albums whose images evoke a vanished world of Old Delhi, liveried retainers and the ''Fishing Fleet'' - young British ladies who sailed to India in the cool season in the hopes of landing husbands.

Masselos, an honorary reader in history at Sydney University, made his first trip to India in 1961 and spent much of his early visits researching in Bombay (Mumbai).

''But I got sick of spending my life in India working in an archive where I'd stare at the walls when there was all this world outside,'' he says. So he began exploring one of the country's more remote regions, one famed for its rich textiles.

His travels in the Kutch area of Gujarat led him to peasant embroiderers who told him about their designs as they worked in the dust. And they led to the region's former Maharani, with whom Masselos became friends.

She shared her knowledge of the region's arts and her courtly life before independence, when her youthful modesty was guarded by an Ethiopian eunuch slave. ''Some of the metallic embroideries she once wore were so heavy she would need help to walk,'' Masselos says.

Ornate embroidered blouses that belonged to the late Maharani's family are among the works that will be on show in The Indian Empire, the gallery's first display of items from Masselos's artworks, known as the Portvale Collection.

The focus of his wide-ranging collection is folk art but not all of the items have come from India.

Some were bought in Australia where a number of Raj-era figures retired or served and brought their mementos with them.

The collection, worth several hundred thousand dollars, is a vital addition to the gallery's Indian holdings, says its curator of Asian art, Jackie Menzies.