submitted by Kytherian Cultural Exchange on 14.03.2012 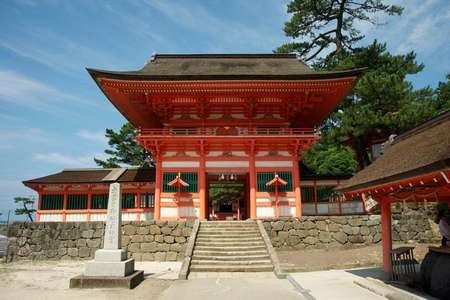 A Journey to Glimpses of Unfamiliar Japan

1st Session “Chief City of province of the Gods”

Lafcadio Hearn’s (Koizumi Yakumo) Glimpses of Unfamiliar Japan (Vol.1 & 2, 1894) is said to be the best work among his primary field of writing, reportage and travel books. There is tension in the words “Glimpses” and “Unfamiliar” written alongside each other in the book’s title. “Glimpses” incorporates the humbleness of a foreigner having come to Japan and written his first book here having only glimpsed the country. On the other hand, his use of the word “Unfamiliar” to describe his subject suggests that he is confident he is writing about an aspect of Japanese culture yet undiscovered, the “Hidden Spiritual Lives of the people” descendant from ancient Izumo.

This book contains observations made using his finely- honed senses throughout his year and three month stay in Matsue, trips to parts of the Sanin Area, and a journey from Kumamoto to the Oki Islands in 1895. Considering its contents, it could be referred to as “Meiji Izumo-no- kuni Fudoki” (Records of the culture and geography of Izumo province during Meiji). It became a best seller, publishing as many as twenty six issues of the first edition alone. Later, P.D. Parkins, editor of Hearn’s bibliography gave his evaluation of the book by commenting that “There may be no other city like Matsue or Izumo that can be made so well known to those who have never been….Surely there must be only a few places in the world that have travel guidebooks as complete as this”.

This review shows the double-sided aspect of this book, one as a piece of literature, and the other as a travel guidebook.
The purpose of this exhibition is to interpret Hearn’s book from the following three aspects;
1) His interest in anthropology (main theme of this book) and observation methods involving fieldwork observations using his sharp five senses, leading to his intuitively deep and exact understanding of Japan
2) Hearn’s ability as a word painter describing and expressing his views toward nature and his sense of beauty
3) Hearn’s skills as a reporter, his strong curiosity and perceptive observations when visiting a variety of areas in the Sanin region.

Through this exhibition of photographs by Takashima Toshinobu and a collection of talismans collected by Hearn himself, we are inviting all those who come to see the exhibit on a trip to the world of Glimpses of Unfamiliar Japan.

Through his photography, Takashima Toshinobu depicts Hearn’s world as it is in the modern world. This is a collaboration between the writer, Lafcadio Hearn and photographer Takashima who was born here in Matsue and has a deep understanding of Hearn. We hope to take every visitor on a trip through photography around the sites in Matsue and the Sanin area, moving freely between Hearn’s time and nowadays, more than 100 years after Hearn made the same trips shown in Takashima’s photos.

This exhibition will be held over the course of one year divided into two terms. We would like you to enjoy the photos taken by Takashima Toshinobu with the correlating captions of the sites noted in Glimpses of Unfamiliar Japan, and entice viewers on an actual trip to those spots with the book as a guide.

In the first term, under the theme of “The Chief City of the Province of the Gods”, his trips in the first volume of Glimpses of Unfamiliar Japan will be exhibited. There will be approximately fifteen exhibits including Ichibata Yakushi temple, Inasa no hama (Inasa Beach) and Izumo Taisha Shrine together with the sites in Matsue including Gesshoji Temple, Jozan Inari Shrine, Kamosu Shrine, Yaegaki Shrine, Ryushoji Temple, Hearn’s former residence, Komori-inari Shrine.

In the second term of the exhibition, entitled “Travelling Hearn”, we will be featuring locations included in the second volume of Glimpses of Unfamiliar Japan. There will be fifteen pieces on show, including Miho Shrine, Kaka no kugedo (the caves of Kaka), Hanamigata Grave yard, Unnju Temple, Oki Islands, Mt. Daisen.

Also on exhibit during both terms will be pictures of Hearn’s collection of talismans from the shrines he visited, currently housed in the Pitt Rivers Museum
(*1), letters from Hearn to Chamberlain, the first edition of Glimpses of Unfamiliar Japan published by Houghton Mifflin. Co. and its translation into French and German collected by Takis Efstathiou
(*2). In particular, displaying Hearn’s collection of talismans from that period alongside their modern counterparts creates an interesting contrast, and should raise the level of interest of visitors to the exhibition.

A map indicating the sites Hearn visited will also be exhibited in order to encourage readers and those who visit the exhibition on a trip to the very locations from the book. Gallery talks by Bon Koizumi, Hearn’s great grandson, and Takashima Toshinobu, are planned to be held concurrently with the exhibition, alongside walking tours and bus tours visiting Hearn related locations, and lectures throughout the exhibition terms. During the period of summer vacation we will be planning children’s event.

Those who use Glimpses of Unfamiliar Japan as a guidebook when visiting the various locations, can share freely how they felt and perceived those places using their five senses by posting comments or photos with the tag “Hearn’s World As I See It” on Twitter and Facebook, which will also be exhibited on the notice board on our homepage.

The purpose of this is to make an exhibition of contributions by the public by submitting pictures and writings. In short, along with being an exhibition, this project takes a new approach to enjoying Hearn through the two aspects of literature and tourism, by invitation to walks and trips. Within this new approach, we are afforded the opportunity to re-evaluate and re-interpret Hearn’s Glimpses of Unfamiliar Japan. It is an attempt at self- reflection in today’s world.

*1: Pitt Rivers Museum
Pitt Rivers Museum is a part of Oxford University in Britain. It was founded when Pitt Rivers, who was a military man as well as an anthropologist (Real name: Augustus Henry Lane Fox 1827–1900) donated his collection of 17,500 anthropological materials. It houses almost one million materials which includes a Chamberlain Collection of 1,324 items related to Japanese religion donated by Basil Hall Chamberlain, of which 349 are talismans. Eighty of the talismans seem to have been collected by Hearn in Izumo and Kumamoto Regions.

*2: Takis Efstathiou
Art Coordinator based in Greece and New York. As the proposer of ‘The Open Mind of Lafcadio Hearn’, he has been enthusiastically involved in the unique activities for recognition of Hearn from the view point of ‘Hearn and Art’ since 2009. He is also known as a collector of Hearn’s books.

One of his collections exhibited at the exhibition titled ‘KWAIDAN—The Special Collection of Books and Film’ held at Lafcadio Hearn Memorial Museum in 2011 attracted attention both domestically and abroad.


Born in Izumo City in 1972. Graduated from Osaka University of Arts, Art Planning Department. The Hanshin-Awaji Earthquake occurred while he was a university student. He belonged to the Volunteer Committee of Ashiya City as Chief of the Photographic Recording Department and planned a project in which the damages of the Earthquake were recorded photographically with the victims themselves taking photos of the areas. This project later developed into a variety of projects including “Photo Exhibition of the Hanshin-Awaji Earthquake from the view of the victims” from 1995 (30 venues held in Japan). Also “Ten Years on from the Earthquake” sponsored by Ashiya Municipal Art Museum as a main organizer, participation in Yokohama Toriennare 2005, “Special Exhibition Commemorating the 15th Anniversary of the Hanshin-Awaji Earthquake” (2010) and “Memoir of Hanshin Earthquake” (2012).

As a professional photographer, he has been holding exhibitions regularly since 1994. He organized the exhibition “Koizumi Yakumo and the Country of Gods” at the Russian National Arsenyev Museum.

His works exhibited there are housed at the Museum. He has held many individual and group exhibitions. He has also taken quite a few photos for the work collections of artists, designers and websites.

As an art planner, he plans projects based on regional history and culture including art projects and photo exhibitions utilizing historical architecture and old houses.

In 2001, he acted as a representative of “Fujichu Building Project”, an event held in a building constructed in 1928 which was planned to be dismantled due to the expansion of the streets in Tenjin district, Matsue City. More than thirty events were held in this project within the period of four months. He also covered the achievements of the only photo studio and the only photographer in Daikonshima Island and introduced them widely to the public.

In 2010 and 2011, he was involved in a project called ‘Okudani Time Tunnel’ to support reservation and utilization of the former lodgment of Shimane University in Okudani Town. Making use of facilities such as empty houses, temples and shrines, a community hall, and a residence of an architect in the neighborhood of the lodgment, his project, featuring walking through the town, drew a lot of attention.

He has also been engaged in making propositions, planning, photos shoots and implementing events including ‘Map for Rambling through Town with Lafcadio Hearn’ together with The Hearn Society and Matsue City.

Since 2009, he has been a representative of “Dokodemo Museum Kenkyusho” (Research Centre for Museums everywhere) consisting of modern artists and planners.