The Australian milk bar may be disappearing from our streets, but Eamon Donnelly and Adam Gerondis are doing their bit to keep this much-loved icon alive in our memories. 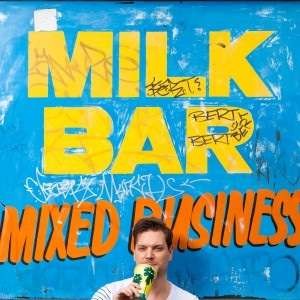 Artist, archivist and self-confessed milk bar junkie Eamon Donnelly would have had more toasted sandwiches and milkshakes than most.
For more than a decade, he’s been capturing Australia’s disappearing milk bars on camera – a project that’s taken him to over 200 milk bars, and resulted in thousands of images of fading signage, dusty shelves, paper straws and metal cups.
It’s a journey with its beginnings in Geelong in the eighties. As a young boy, Eamon would ride his bike down the back lane to a place known as ‘Dave’s’. “I’d have a pocket full of copper – in those days you could buy 100 lollies for a dollar,” he said. “Everyone in the neighbourhood knew Dave’s.”

About a decade ago, he went back to Geelong to find that Dave’s had gone, as had so many of the milk bars of his hometown. “There were just the old signs,” he said. “And I began to take pictures of them.” As a graphic artist he loves the faded colours, the typography, and the hand painting on the older signage. And yet his love of the milk bar extends beyond the artist’s appreciation for a good hand-painted Cornetto. Like so many Australians, he also has a deep nostalgia for the milk bars of our past. “They hark back to a time when everyone knew their neighbours, when there was more community. Often they were run by migrant families. Their kids were there after school and would translate for the parents.”
Most recently, he’s come to Sydney to capture the last of our local milk bars as part of his project for this year’s Art & About Sydney.
He visited The Rio in Smith Street, Summer Hill, and The Olympia on Parramatta Road, Stanmore, both of which have had their doors open for more than 60 years.
And when a milk bar is still serving customers, Eamon always makes sure he goes in and orders a toasted sandwich and a milkshake.
His favourite flavour? “Blue Heaven,” he says. “But no one has it here. I think it’s a Melbourne thing – it’s vanilla really, but there’s quite a bit of blue colouring involved.” 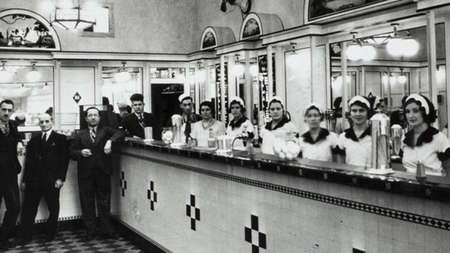 A little like the 1930s American drugstore soda parlours, The Black & White may have been the first venue in the world to focus exclusively on the milkshake, which was drunk standing up at the counter. It was a roaring success, with Adams and his staff reputedly serving thousands of people a week. Unfortunately the milk bar had closed by the time Adam was born – yet a love of the humble shake runs in his veins. Growing up, the Bates Milk Bar on Campbell Parade at Bondi Beach was his local favourite. “They even had one of my grandfather’s inventions there – the ‘Adam’s Correct Measure’,” he said. “It was used to measure out the correct amount of malt – and they used it right up until they closed in 2001. I now have it and I believe it’s the last one around anywhere.” Adam runs Moo Gourmet Burgers, a place that he says tries to bring back a touch of the old days, with all food made fresh daily in the store. “And great old fashioned milk shakes,” he said. “Served in the metal cups with a paper straw. No matter how many I make, I always think of my grandfather.”

Join Art & About Creative Director Gill Minervini as she leads a panel discussion on Australian milk bars. The discussion will explore the history of the milk bar in Australia with the 2014 Banner Gallery artist Eamon Donnelly and City of Sydney historian Dr Lisa Murray. Leonard Janiszewski and Effy Alexakis, who have been researching the history of Australia’s Greek cafés for over a quarter of a century will join the discussion and share their stories on the development of this iconic Aussie favourite.