Culture > Current Affairs > ONE-DAY CONFERENCE IN KYTHERA: “THE HISTORY AND CULTURE OF KYTHERA AND KYTHERIAN DIASPORA”

ONE-DAY CONFERENCE IN KYTHERA: “THE HISTORY AND CULTURE OF KYTHERA AND KYTHERIAN DIASPORA” 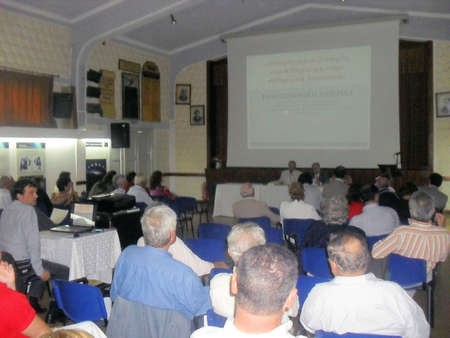 These bodies have collaborated with universities and research centres both in Greece and abroad, under the leadership of George Leontsinis, Professor Emeritus of Modern Greek History and the History Didactics at the University of Athens, President of the Cultural Centre of the Municipality of Kythera and elected Councillor of the Municipality of Kythera since 1999. Professor Leontsinis has organised a series of conferences and academic meetings on Kythera over a number of years with the participation of academics and researchers from Greece and abroad. These have built on the outstanding First International Conference on Kytherian Studies held on 20-24 September 2000, at which around 200 researchers presented papers, subsequently published in the five elegant volumes of the conference Proceedings (2003), which illustrate the history and culture of Kythera and the island’s dynamism.

The programme of this one-day conference, which was very well received and widely attended by the Kytherian public, was divided into three parts. In the first part the speakers evaluated the work that has been produced over the past decade (1999-2010), outlining the subject areas and broader field of the research conducted by the scientists and academics, who have altogether presented approximately 400 papers at these conferences. The range of the research being done was highlighted, as was the impact it has had and continues to have on the Greek and international academic community. The speakers emphasised that the history and culture of Kythera and Kytherian Diaspora have been internationalised, underlining that the quality of the research being done for the first time on Kythera is of a very high standard. This has demonstrated the great research strengths of Kytherian scholars and the positive response of the local community.

The second conference part involved a presentation of the material digitised during the project “Cultural and tourism tour of Kythera using information and communications technologies”. This project comes under Measure 2.4 (Invitations 78 and 91) of the Operational Programme “Information Society” (Collection, documentation and digitisation of cultural and historical material and tourism products). Prof. George Leontsinis acted as the project’s scientific director and Mrs Natasa Papaconstantinou, a doctoral candidate at the University of Athens, as its scientific collaborator. The project was conducted as part of the activities of the Municipality of Kythera and in association with a programme of the Region of Attica and Islands. This project provides a presentation of places of natural beauty, natural monuments, alternative tourism routes, beaches, castles, churches and monasteries, other religious monuments (private churches, chapels, and rural churches), cultural associations and institutes, cultural events, hotels and traditional hostels, and the traditional products of Kythera. Digitised documents have been created for each item –all of which are integrated parts of Kythera’s unified cultural terrain– and have then been uploaded onto the internet along with a concise description. The “Cultural and tourism tour of Kythera using information and communications technologies” project has created a scientifically documented digital collection of material on the history, culture and tourism of Kythera. The team working on the collection aims to enrich it continuously with new material and believes that it will revive the cultural and tourism image of Kythera. This project is showcased in the Region of Attica and the Islands publication entitled “Internet Gateways to Culture and Tourism in the Regions”. The database was designed in such a way as to be uploaded to the websites of the Region of Attica and the Municipality of Kythera, making it easily accessible to the teaching community.

The one-day conference came to a close with the screening of the documentary DVD entitled “Kythera: Myth, history and reality”, a 2008 production of the Municipality of Kythera which is available from the Municipality’s Cultural Centre. The Municipality of Kythera Cultural Centre is a legal entity of public law which was officially founded this year and is housed at the historical centre of Chora, in the former Town Hall (Government Gazette, number 702, issue second, 25 May 2010). The Proceedings of the previous conferences are also available there. There was an exhibition of the earlier conference Proceedings and the documentary at the conference, whilst, during the coffee breaks, Kytherian sweets were served thus giving participants the opportunity to converse with each other in a friendly atmosphere. University professors and researchers from Greece and Cyprus gave a thorough evaluation of the scholarly and cultural work done on Kythera in the past ten years. Many of our fellow Kytherians attended the conference and the atmosphere was exceptionally warm. The participants commented upon the fact that academic events, with the creativity they personify, capture the interest of our fellow Kytherians and promote our island.

As co-organiser of the one-day conference, held on an initiative of the Municipality of Kythera, the Mayor of Kythera Mr Theodoros Koukoulis greeted the participants and gave a detailed speech in which he detailed the cultural and social work done by the Municipality of Kythera. Professor Georgios Leontsinis discussed the history and culture of Kythera and Kytherian Diaspora, giving an account and assessment of the conferences and the publishing and research work done over the past decade (1999-2010). Professor Leontsinis noted that with the publication of eleven volumes (ten with a Kytherian content and one with a medical content) of the Conference Proceedings, of which he himself is the editor, this research is now available to all scholars, academics and researchers as well as to the wider public, and the Proceedings can be purchased from the Municipality of Kythera, thus also raising funds for it. They are also available in Greek and foreign libraries and have become established as an essential works of reference for further research.

Professor Leontsinis gave a concise presentation of this publishing activity whilst the invited speakers outlined some aspects of the subjects that are contained within the volumes of the Proceedings. Professor Evangelia Georgitsogianni of the Harokopion University presented the two volumes of the Proceedings on the subject of “Kytherian Migration: Historical Dimensions and Contemporary Population Movements” and “Kytherian Bequests and Greek Benefaction”. Dr Kalypso Michalakaki, who holds a PhD in History, spoke on the subject of “Kytherian organisations and brotherhoods at home and abroad” whilst Dr Christina Kolovou, who holds a PhD in Theology, presented the two volumes of the Proceedings on “Church, Education – Schooling and Culture on Kythera (19th-20th century)” and also spoke on “Academic Research on the Church of Kythera”. Professor Aimilios Solomos of the University of Nicosia, participated in the conference with an exceptionally interesting paper entitled “The Aphrodite of Kythera or the Aphrodite of Cyprus?” based on the academic papers in the volume of the Proceedings dedicated to “Symbolic Kythera”. The doctoral candidate Natasa Papakonstantinou could not make the conference but her paper entitled “Cultural and tourism tour of Kythera using information and communications technologies” was read by Georgios Giotis, also a doctoral candidate at the University of Athens.

After Prof. Leontsinis’ welcoming speech to the Mayor of Kythera Mr Theodoros Koukoulis, a souvenir plaque and honorary diploma were awarded to Mr Efthimios Polychronakos, mathematics teacher at the Kythera High-School in Chora. This is in recognition of his great contribution to the education of young Kytherians and the science of mathematics and for his long contribution over many years to the society and culture of Kythera. The conference closed with the screening of the documentary “Kythera: Myth, History and Reality”, which was produced in 2002, publicly screened with great success in 2004 and which, since 2008, has had English subtitles added to it and has now been officially released and is commercially available. The documentary produced the same strong emotions in both the general public and the scholars as it had at its first screening, and was again admired for its quality.

The event was attended by many of our compatriots from the Kytherian Diaspora, including the President of the Kytherian Association of Australia Mr Victor Kepreotis and the Association’s public relations officer Mr George Poulos, who extended their stay on Kythera to participate in the conference. Amongst the compatriot diaspora Kytherians whom we were able to identify, given the large number of conference participants, were esteemed friends Mr George Hatziplis, Mr Minas Raisis, and Mrs Antonia Aronis. The event was honoured by the presence of Greek politicians Mr Alekos Alavanos (Syrriza Political Party) and Mr Spyridon Spyridonas (New Democracy Political Party), who were visiting the island, whilst His Eminency Metropolitan Bishop of Kythera Seraphim, who was not on the island, was represented by Father Froumentios of Chora.

The Municipality of Kythera and the conference organising committee would like to thank the president of the Kytherian Association of Chora (Syndesmos), the well-known painter Mr Manolis Charos, and the members of the Board of Trustees for allowing use of the Hall and for the warm reception that the Syndesmos, which has also hosted all the previous activities of the Open Free University of the Municipality of Kythera, gave the conference. Many thanks are also due to the Municipality’s administrative staff Mr Panagiotes Yianniotis and Mrs Georgia Tseri, and to all the administrative staff of the Municipality of Kythera who have supported these cultural activities throughout the years, and also the Deputy Mayors and Councillors of the Kytherian Municipal Council who were present. Thanks are also due to the Kytherian public and to the members of the conference secretariat, postgraduate students and doctoral candidates of the University of Athens Mr George Giotis, Mr Pericles Tsabalas, and Mr Demetrius Hatzikakides for their selfless contribution to the success of this one-day conference.