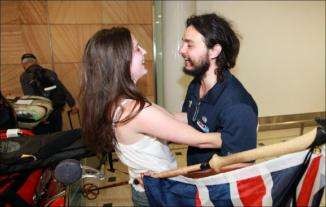 
Fresh from conquering the South Pole, Willoughby adventurer James Castrission has set his sights on a new and equally scary adventure - marriage.

Castrission (Cas), along with his former Knox Grammar school friend Justin (Jonesy) Jones returned to Australia over the weekend after completing an unassisted trek from the edge of the Antarctic mainland to the South Pole and back.

The two adventurers, along with Norwegian skier Alex Gamme, who completed the journey alongside them, were the first ever to complete the 2300km journey unassisted.

Castrission said it felt amazing to have completed the momentous feat but admitted it was not until the end of the 90-day journey that it seemed attainable.

“At the start we were making less than 10km a day and encountered heavy blizzards for the first 3 1/2 weeks,” he said.

“We were thinking, ‘What have we got ourselves into?’

Castrission said it was cold and lonely on the ice and there were times when they feared not just for the fate of their journey but their own safety.

“This journey really was on the limits of what we thought we, or anyone, could achieve.”

After completing the harrowing journey, the pair were forced to wait at the Chilean Base in Antarctica for weather to ease so they could fly out.

They had to wait six days before they could fly back to Chile en route home but Castrission said the extra days in solitude had given them time to come to terms with their accomplishment.

“It was just an incredible relief and so nice to not have to ski every day. It was a good chance to digest what we had achieved.”

He stopped short of listing his next challenge, saying he looks forward to the challenge of married life, with his wedding three weeks away.