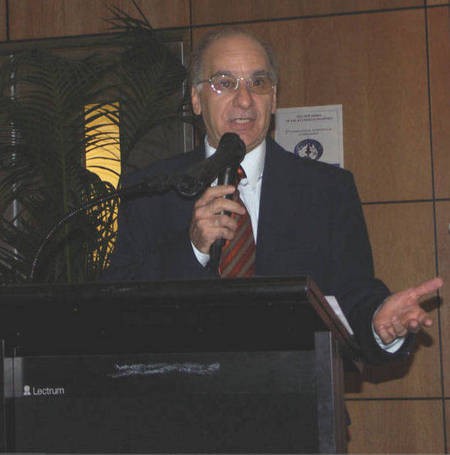 
Dear compatriots and philo-Kytherians all over the world.

The Institute of Kytheraismos in association with its local committees all around the world, the Kytherian Brotherhoods and other Associations, organizes in Kythera the 3rd International Symposium of Kytheraismos.


Main topic of the Symposium is:

From the Kytherian Identity to the multi-cultural heterocity (diversity).

The presentations must be limited to a maximum of twenty minutes. The official languages of the Symposium are Greek and English. Those wishing to present a paper should complete the Participation form,

giving personal details, the title, and a short abstract in Greek and English.

Please send participation forms by 30th of June 2008 to the following address:

The presentations must be, in two languages, 20 days before the opening of the Symposium, and be sent to address above.

Additionally, the conference will host cultural events, and there will visits to the archeological and historical sites of the island.

It is widely known that the 3rd International Symposium of Kytheraismos is being organized on Kythera from 21-24 August 2008. Its main theme will be Hetero-Kytheraismos, in other words, the cultural, political, economic and social diverseness of the Tsirigoti in past centuries, but in combination with the current reality. With this opportunity the relations of Kytherians and Philo-Kytherians everywhere will be strengthened and many of today’s significant issues will be discussed.

In this particular ecumenical gathering of Kytherians we will HONOUR our compatriots from everywhere, who emigrated, we’ll REMEMBER our first emigrants, who moulded with sweat and blood their existence abroad, but also those who remained on the island close to their parents and our land. We will PRAISE them as they deserve for their great achievements, their tireless attempts to safeguard Kytherocity, both on the island and abroad, particularly abroad with its many challenges.

We will SHOW the high level of maintenance of principles, ideals, traditions, art and science wherever they lived, and we will REFER to their level of cultural inheritance which they kept and perpetuated and maintained intact up to even today so as to withstand the challenges and invitations of today.
We will REMEMBER our parents and ancestors and we will THINK about the great inroads they made with little means, but as a sole rule and aim the survival of their Kytherocity and the raising of their children; we will think about ourselves with the same communion they fostered, with the same principles they were brought up with so that we can come together and fight for the same objectives
We will SHOW our youth of today our own objectives, our visions, which we received from our elders and we’ll compare our achievements which we owe and, in essence, we leave as a legacy to the next generation, for we literally have borrowed it from them and must surrender it to them.
At this Symposium we will transcend and we will by-pass, the traditional identity of the Tsirigoti, putting for the first time emphasis on his multi-cultural heterocity.

It is the other side of the coin which stands out (Kythera, Kytherians and Philo-Kytherians). It is his difference, that which distinguishes him, and will continue to distinguish him, that which always characterized him, his great cultural embrace which finds the Tsirigoti and his friends at the turn of the great century. That cultural embrace which made him accept many civilisations, religions, mixtures, deprivations and enslavement. Yet, he remained unique in his difference, even multi-cultural in his hospitality, crystal clear in his Kytherocity.

On the 24th of August a new chapter will open for Kythera, for Kytherians abroad and Philo-Kytherians; a new chapter at the beginning of the 21st century in a book which will never close. In its pages will be written and noted, images and events, unified and in indelible ink, of a continuous Kytherian chronology, a portrayal of past and future history, whether these events take place in Australia, in America, in Athens’ Kytheroupolis or in our birthplace under the veil of Kytherocity.

The thematic units of the Symposium:

A) The migratory heterocity of the Kytherians

B) The Cultural Heterocity
I. Cultural Activities

1 The culture of the Kytherians all over the world.
2 Kytherian women in the arts
3 The allegory of the island of Kythera

G) The philo-Kytheraismos and voluntarism