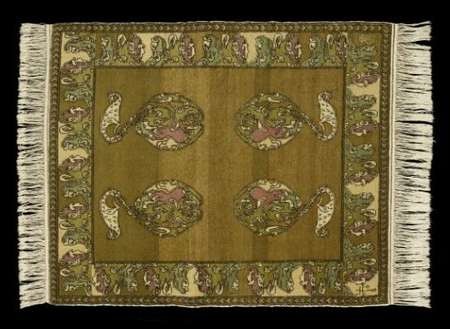 This handwoven rug is titled 'Creation' and was designed by Joice NanKivell Loch and woven by Turkish refugees in the village of Ouranopoulis, in Greece in the mid 1900s. Joice and her husband Sydney were deeply committed to alleviating poverty in Ouranoupolis. While visiting an elderly patient suffering from malnutrition, Joice became aware that the village women could use their weaving skills to earn income and saw this as an opportunity to help the villagers become self-sufficient. She sourced wool and cotton, had a loom built, learned about natural dyes and formed a women's weaving cooperative called Pyrgos Rugs.

Joice's designs had a distinctive Greek rather than Turkish identity, as anti-Muslim sentiment was strong in Greece. Inspiration for the designs came from frescoes, carvings and illuminated manuscripts that Sydney would photograph for her. Joice translated the photographic image into an intricate design featuring Byzantine motifs. The design for the 'Creation' rug features a circular motif composed of a two-headed dragon which is biting itself and 'breathing out' evolving plant and animal life.

Joice NanKivell Loch, who was born in Queensland in 1887 and died in 1982, is Australia's most decorated woman. This rug, with its Byzantine-inspired design, reflects Joice's extraordinary life and humanitarian work. In addition to the selfless work she and her husband engaged in for decades in Greece, she was an Allied agent during World War 2. On one occasion, she organised a train trip and rescued Jewish children from Nazi death camps by dressing them as Gentile daytrippers.

This handwoven rug is called 'Creation' and was designed by Joice NanKivell Loch (b.1887) and woven by Turkish refugees in Pyrgos, Greece.

Joice Loch ran Pyrgos Rugs from her home in the historic tower of Prosforion in what was the former refugee village of Ouranoupolis. She organised a cooperative for the Turkish women of the village as well as the materials and looms. Most of the women and girls wove the rugs at home. Often two girls sat side by side at a loom weaving from designs Joice copied for them on graph paper - known as cartoons. Even girls who were unable to read or write were able to follow the cartoons which were nailed above the loom.

Joice's designs for the rugs had a distinctive Greek identity rather than Turkish, as anti-Muslim sentiment was strong. Inspiration for the designs came from frescoes, carvings and illuminated manuscripts that Sydney would photograph. Joice would translate the photographic image into an intricate design featuring Byzantine motifs. Natural hand-produced dyes were used for longer-lasting colour. Pink or pinkish beige as seen in this rug was produced by using pine chips with salt added as a mordant, or from willow bark to which alum had been added. Bright green was produced by fermenting cow manure and ivy leaves. A more brilliant hue could be attained by using human urine. Herbs, leaves, sawdust, berries, blossom, bark and beetles were also some of the ingredients used in the making of the natural dyes.

Pygros Rugs were marketed as luxurious collectibles featuring unique designs. Genuine Pyrgos rugs feature the 'Nutcracker Eagle' motif in some form.The motif is woven into a corner of the 'Creation' rug. The two-headed dragon is shown 'breathing out' evolving plant and animal life in a circular formation on a khaki background. The evolving plant and animal life is repeated in the border. The 'Nutcracker Eagle' motif is the oldest form of the double-headed eagle on nearby Mt Athos and originated from the carved wooden nutcrackers which were used by the early hermits on the Mountain.

The 'Creation' rug is testament to the extraordinary life of an exceptional Australian woman. Joice NanKivell Loch (1887-1982) was born into one of Australia's wealthiest families during a cyclone on a Queensland sugar plantation. The abolition of slave labour saw a reverse in the family fortunes and, determined to escape a life of poverty, Joice wrote children's stories and became one of Australia's first female journalists.

Joice met her husband, Sydney Loch, a Gallipoli veteran and writer, when she reviewed his Gallipoli book 'Straits Impregnable'. They married in 1918 and travelled to Ireland where they were commissioned to write an anti-IRA book. To escape the ire of the IRA, they travelled to Poland where they worked with the Quakers, rescuing countless dispossessed people from disease and starvation. In 1922, Joice and Sydney went to the refugee village of Ouranopoulis in Greece to work with the thousands of Greek Orthodox refugees fleeing Turkish persecution. They made their home in the tower of Prosforion which was built, in the shadow of Mt Athos, by a Byzantine emperor.

Joice and Sydney were deeply committed to alleviating poverty in Ouranoupolis. While visiting an elderly patient suffering from malnutrition, Joice became aware that the village women might use their weaving skills to earn income. They had been weavers in Turkey and Joice saw this as an opportunity to make the village self-sufficient. She sourced wool and cotton, had a loom built and formed a women's weaving cooperative, Pyrgos Rugs.

Being aware that anti-Muslim sentiment meant that rugs featuring Turkish designs in a Greek market would not sell, Joice based the designs for Pyrgos Rugs on ancient Greek motifs. She saw her rugs as 'art history' and also drew from prehistoric designs on cave walls in Australia, Africa and Europe. With perseverance and patience, Joice was able to persuade the women to weave rugs featuring Byzantine and other non-Turkish designs using natural dyes. Three of the very first Pyrgos Rugs designed by Joice won first prize at the International Trade Fair in Thessalonika. The success of Prygos Rugs was assured.

Other examples of Joice's courage and humanitarian efforts include working as an agent for the allies during World War 2. For example, she organised a train trip and rescued Jewish children from Nazi death camps by dressing them as Gentile daytrippers - it was given the codename 'Operation Pied Piper' by the British Foreign Office. Joice NanKivell Loch received a total of 11 medals from Greece, Poland, Romania and Britain for her humanitarian efforts and courage. She is Australia's most decorated woman and has been acknowledged by the Greek Orthodox Bishop of Oxford, as 'one of the greatest women of the 20th century.'

The 'Creation' rug was one of five Pyrgos rugs donated to the Australia Council. In 2005, the Council agreed to donate one of these to the Greek people for display in the Byzantine Museum in Ouranopolis (formerly the tower Prosforian which was Joice and Sydney's home.) Two rooms of the museum are dedicated to displaying Joice's work. The Council subsequently offered one of the remaining four rugs to the Powerhouse Museum; the rug selected was chosen as it best represents the Byzantine designs for which Pyrgos Rugs are renowned. The other three rugs have been retained by the Australia Council and are on public display in their Sydney offices.

Rectangular pile rug called 'Creation' with a Byzantine style design, handwoven with naturally dyed wool in pale green, khaki, pink and cream. The centre of the rug features four cream two-headed dragons, off-set from each corner. The two-headed dragon is 'breathing out' the evolution of plant and animal life in a circular formation on a khaki background; the evolving plant and animal life theme is repeated in the border which is itself edged with a narrow chevron outer border. The 'Nutcracker Eagle' motif in cream features in one corner, just inside the outer border, with possibly a Byzantine symbol in brown in the opposite corner.

Acquisition credit line
Gift of the Australia Council for the Arts, 2006