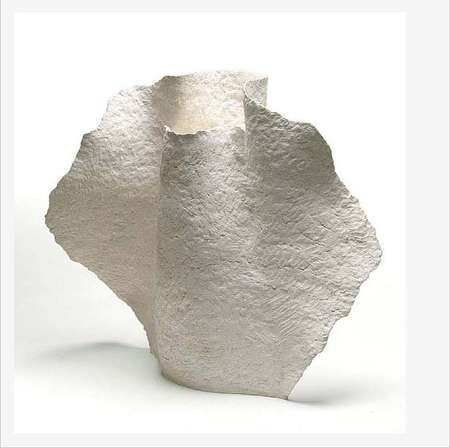 Marea’s father, Charalambos Ploumedis (he changed his name to Harry Medis) migrated to Brisbane from the island of Antikythera in 1920. He married Christina Rudkin, a woman of English and Scottish descent, and Marea was born in 1928, when her parents moved to Surry Hills.

Artists usually name their work when it is finished, ready for exhibition. The title Kamares is from Greek objects I have admired over the years. My father was Greek and I am familiar with Greek culture.

Kamares VII formed part of a prestigious exhibition, Clay & fibre, which the noted fibre artist Mona Hessing and I were invited to stage at the National Gallery of Victoria in 1973. I say ‘stage’ because we saw the huge special exhibition space as a design challenge! Mona chose fibre colours from beige to earth red in tone, and I chose white as a jewel-like contrast. It was gratifying for Mona and me, after 2 1/2 years work, to know that thousands of people saw the exhibition. (Even now, 30 years later, I meet people who remember it!) Kamares VII is handbuilt (coiled and flattened). I worked on a kiln shelf which, later on, slides into a kiln for firing. I enjoy working in clay — whether it is to be cast in bronze, or fired as clay.

To develop an idea (the difficult bit) I do many full size sketches on paper and then small maquettes and full size clay pieces to see if it ‘works’. Having resolved technical problems, as well as the aesthetic, I do some variations on the theme, to make a family (or group) of several pieces. Kamares VII is the last of the Kamares group. The idea behind the Kamares group came from looking at everything — artefacts from museums all over the world (museums are a passion of mine) as well as natural objects: shells, seedpods, stones, the ears of elephants, and manta rays. In Kamares VII, I wanted to give a feeling of free movement to the work.