submitted by Kytherian Cultural Exchange on 01.11.2006

*Orest Keywan is the life partner of vibrant young Kytherian Sophia Zantiotos. Who in turn is the daughter of former Kytherian optometrist, and "man about town", Steve Zantiotis. Their Kytherian town of origin is Ayia Anastasia. 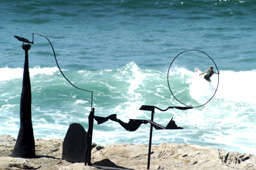 Born in Marienbad, Czech Republic, Orest migrated to Australia in the 1960s, where he studied under Lyndon Dadswell, one of Australia's most accomplished sculptors, at the National Art School in Sydney. Orest later became a lecturer at the Alexander Mackie College of Advanced Education (now known as the College of Fine Art, University of NSW).

Acclaimed as 'one of the best sculptors we have' by art critic Sebastian Smee, Orest has represented in public and private collections in Australia and internationally.

Orest Keywan's work featured at Sculpture by the Sea in 2005 was entitled Constanta Dreaming. The sculpture stood at 192 x 164 x 132cm and was created out of stainless steel, steel, synthetic resin, wood and concrete. 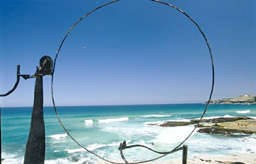 The 10th annual Sculpture by the Sea Bondi

Sculpture by the Sea turns 10! The Bondi-to-Tamarama coastal walk will again be transformed into a magnificent outdoor art gallery, hosting one of the largest and most popular sculpture exhibitions in the world. This year's exhibition will feature 108 sculptures by artists from 11 different countries.

The celebrations begin a week before the Bondi exhibition with one of the most popular sculptures ever exhibited, 10 little friends by Richie Kuhaupt, making a return visit, popping up right across Sydney in unusual and unlikely places from the Blue Mountains to Bondi Beach. During the exhibition Sculpture by the Sea will be taking to the sky with Guy Warren's Icarus to be created several times by a sky writer for the whole of Sydney to see.

The event has always attracted a strong contingent of international artists and in 2006 the work of sculptors from Scotland, New Zealand, Italy, Japan, England, Germany, Denmark, Sweden, Malaysia and the USA, as well as the work of Australian sculptors, will be exhibited. For more information, see the Artists page.

For information about Bondi, see the About Bondi page.