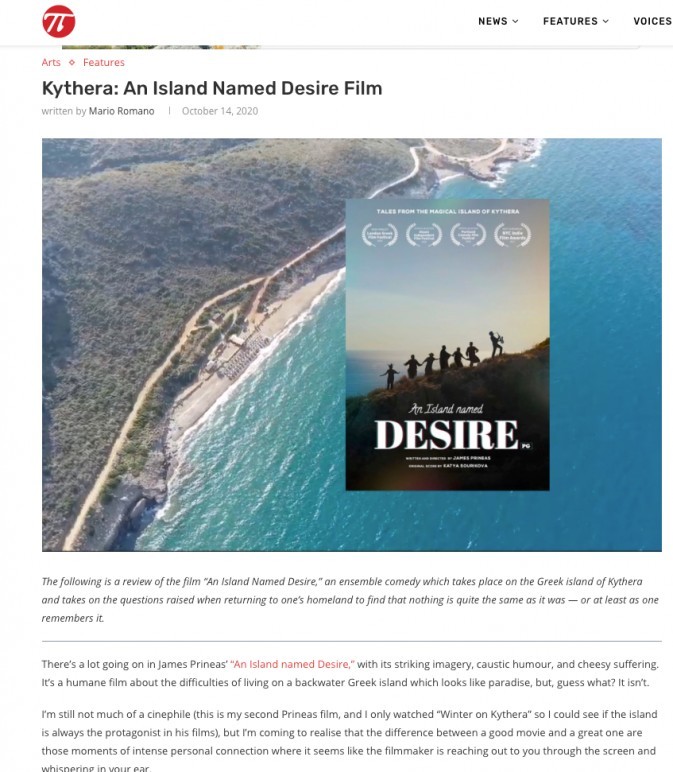 There’s a lot going on in James Prineas’ “An Island named Desire,” with its striking imagery, caustic humour, and cheesy suffering. It’s a humane film about the difficulties of living on a backwater Greek island which looks like paradise, but, guess what? It isn’t.

I’m still not much of a cinephile (this is my second Prineas film, and I only watched “Winter on Kythera” so I could see if the island is always the protagonist in his films), but I’m coming to realise that the difference between a good movie and a great one are those moments of intense personal connection where it seems like the filmmaker is reaching out to you through the screen and whispering in your ear.

As if there is no real distance between you and the director, time has changed nothing, and the moment remains as pure as it was on the day it was filmed. There are lots of moments like that in “Desire,” between the jokes (which are great) and the absurd symbolism that admittedly sort of flies over my head.

I wasn’t surprised by those moments, but I was surprised to find that “Desire” has an actual plot (Winter on Kythera didn’t really). It isn’t complicated, but it is logical in its surreal way, and oddly suspenseful, even if the movie is constantly going out of its way to remind us that even if a character does make the occasional rational decision they’ll wind up in strife sooner or later.