Exploring the Mysteries and Myth of Aphrodite and Venus 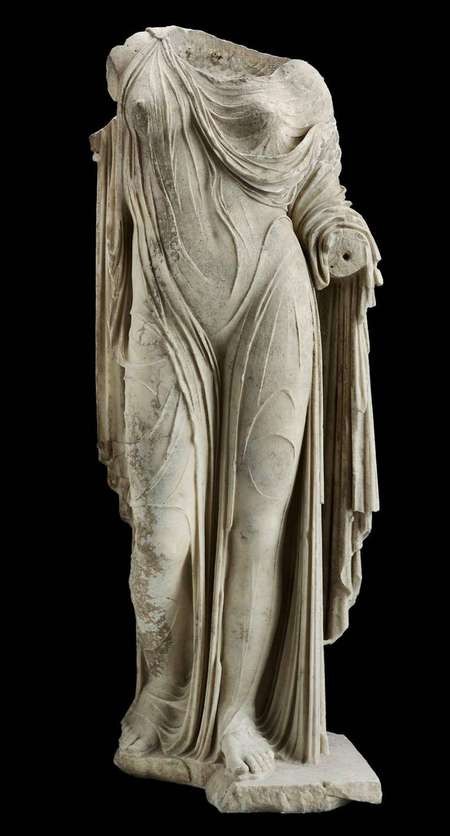 Aphrodite and the Gods of Love

Aphrodite and the Gods of Love aims to answer the questions, “Who was Aphrodite, and why was she so important to the Greeks and Romans?” In addition to celebrating the goddess’s legacy as an icon of romantic love and ideal beauty, the exhibition examines her more complicated nature as a powerful and sometimes capricious deity who influenced the daily lives of mortals, and explores the roles played by the other gods of love — Aphrodite’s children from her many love affairs — particularly the mischievous Eros. It also traces the first depiction of the female nude back to the Knidia, a life-size sculpture of Aphrodite made by the great 4th-century BC artist, Praxiteles, for her temple at Knidos, a Greek city in Asia Minor. This much-copied sculpture (the original has never been found) marked a turning point for the depiction of the female in western art.

Aphrodite and the Gods of Love is the first museum exhibition of classical works devoted solely to Aphrodite (known as Venus to the Romans) and her realm — one that celebrates her likeness as the first female nude in western art history. It features some 160 extraordinary works from the MFA’s Greek and Roman collection, among the finest holdings in the United States, and includes 13 important loans — nine from Rome and Naples — including the spectacular Sleeping Hermaphrodite, which has left Italy only once.

“I am excited to welcome visitors to the realm of the sexy goddess Aphrodite and hope that her powers are still potent and present, as well as her wise ancient ways,” said Malcolm Rogers, Ann and Graham Gund Director of the MFA. “The wonderful loans on view in the exhibition enhance the appreciation of Aphrodite and represent a continuation of the MFA’s longstanding relationship with Italy.”

“We are exceptionally fortunate to have the quality and depth of collection to offer this first-ever survey of Aphrodite, which draws largely from our own holdings and is complemented by generous loans from Italy,” said Christine Kondoleon, the MFA’s George and Margo Behrakis Senior Curator of Greek and Roman Art, who organized the exhibition. “I am proud that the MFA will host the goddess’s US debut, and I fully expect she will attract many new devotees.”

Divided into five main sections, Aphrodite and the Gods of Love begins with the deity’s birth in Cyprus and origins rooted in Near Eastern mythology, followed by an exploration of the cult of Aphrodite, the goddess’s myth and her influence over marriage, the concept of beauty — both ideal and in daily life, and the role Eros and other gods of love played in ancient Greek lore. Additionally, the exhibition assembles for the first time works given to the MFA by noted Boston art collector Edward Perry Warren (1860-1929). In fact, half of the objects in the exhibition can be traced to him (either as gifts from Warren or works he purchased on behalf of the Museum). These are among the 4,000 objects that form the core of the Museum’s holdings of Greek and Roman art, a premier world collection. Warren was responsible for the acquisition of the MFA’s most renowned classical work, Head of Aphrodite (Bartlett Head), (MFA, Greek, 330–300 BC), a sculpture of Aphrodite so admired that even Henry James wrote about her in his book of travel writing, The American Scene (Harper & Brothers Publishers, NY, 1907).

The birth of the goddess reveals her roots in Cyprus, a cosmopolitan crossroads, and in the mythology of Near Eastern divinities who represented beauty, power, and fertility. The development of the most recognized imagery of the goddess, namely her rising from the sea out of a shell, can be found in the show. According to myth, the Titan Kronos castrated his father, the sky god Ouranos, and flung the genitals into the sea, where they were carried on the waves until the mixture created white foam from which Aphrodite (whose name means “born from foam”) was formed, already an irresistible woman. This remarkable birth is depicted in the marble Statuette of Aphrodite emerging from the sea (MFA, Greek or Roman, 1st century BC or 1st century AD) and Oil flask (lekythos) in the form of Aphrodite (MFA, Greek, mid-4th century BC), a richly painted and gilded ceramic container for perfumed oil, where the goddess is seen flanked by winged erotes.

The Greeks believed that Aphrodite had control over many aspects of their lives. Women were among her cult followers because Aphrodite influenced love and marriage, and men because she was thought to oversee male potency and war. This is illustrated by Relief with Aphrodite and devotees (Greek, 4th century BC, Museo Archeologico Nazionale, Naples), a marble votive that shows a family of worshipers bringing a ram for sacrifice before a seated, larger-than-life Aphrodite. Her devotees left pleasing offerings of all kinds in her sanctuaries and particularly popular were statuettes of doves, her favorite type of bird, a terracotta example of which is Statuette of a Dove (MFA, Etruscan, late 3rd–2nd century BC).

As the goddess of love, Aphrodite had primary control over courtship and sexuality, as well as marriage and the creation of legitimate children, which promoted the continuity of Greek society. (Ironically, as the adulterous wife of Hephaistos, the god of the forge, Aphrodite herself was not the best role model for brides.) The importance of marriage can be seen in a variety of wedding- related objects in the exhibition, such as the rare Bathing vessel (loutrophoros) with a bridal procession (MFA, Greek, 450–425 BC). Aphrodite’s influence over love played an important role in one of the pivotal moments of Greek mythology, shown in The Judgment of Paris (Roman, AD 45-79, Museo Archeological Nazionale, Naples). This rare and beautiful fresco from Pompeii depicts the well-known myth in which Zeus asked the Trojan prince Paris to choose who among the goddesses — Hera, Athena, or Aphrodite — was the most beautiful. Paris selected Aphrodite and she rewarded him with Helen, the breathtaking wife of Menelaos of Sparta. So began the 10-year Trojan War, the subject of Homer’s Illiad. Documenting this is an important work from the MFA’s collection, Drinking cup (skyphos) with the departure and recovery of Helen (Greek, about 490–480 BC), by the vase painter Makron.

To the ancient Greeks and Romans, Aphrodite/Venus represented idealized beauty. Prior to Praxiteles’s sculpture of Aphrodite in the 4th century BC, only males were depicted in the nude. Aphrodite and the Gods of Love includes a number of sculptural types that developed in response to the Knidia in the Hellenistic and Roman periods, including the marble Statue of Aphrodite or a Roman lady (MFA, Roman, Imperial Period, about mid-1st century AD), and the terracotta Statuette of Aphrodite untying a sandal (Sandalbinder) (MFA, Greek, 1st century BC). Also featured is the extraordinary Aphrodite of Capua (Roman, AD 117-38, Soprintendenza Speciale per i Beni Archeologici di Napoli e Pompei. Museo Archeologico Nazionale di Napoli) a nearly seven foot tall marble statue of the half-draped goddess with military associations.

The pursuit of beauty extended beyond Mount Olympus, preoccupying earth-bound females who wanted to emulate Aphrodite. A fresco from a villa in Pompei, Three Graces (Roman, 1st century BC–1st Century AD, Museo Archeologico Nazionale, Naples), shows the lovely attendants who assisted Aphrodite with her beauty regimen. Mirrors, perfume, jewelry and cosmetics feature images of the goddess and reflect her influence in this arena. Among the objects on view are the gilt-bronze Mirror with women bathing before a statue of Aphrodite on a pillar (MFA, Roman, AD 110–117) and Mosaic panel (emblem) with cupid gathering roses in a garden (MFA, Roman, 2nd–3rd century AD), which attests to the erotic power and economic significance of the perfume industry in antiquity.

Sharing dominion over love and sexuality with Aphrodite was the youthful Eros (son of the god of war, Ares), whose specialty was passionate desire and erotic love as experienced by members of the opposite or same sex. Equally complicated, albeit more playful than his mother, this challenging child is seen with wings, a bow, and a quiver of arrows in both the Greek depictions of the god, as in the terracotta Statuette of a Flying Eros (Greek, late 2nd century BC), and the Roman versions, where he is portrayed as Cupid, the son of Venus and Mars. An exquisite example is a fresco from the House of Terentius Neonis in Pompeii, Painting of Cupid and Psyche (Roman, AD 45–79, Museo Archeologico Nazionale, Naples), which shows Cupid with the beautiful Psyche, with whom he has fallen in love, engaging in a romantic kiss hitherto rare in ancient art. Aphrodite’s other children have equally distinct characteristics, including Priapos (son of Dionysius), the well-endowed god of fertility; Aeneas (son of Prince Anchises), the Trojan hero who later is said to have founded Rome; and Hermaphrodite (son of Hermes), who is depicted in the languorous Statue of a sleeping Hermaphrodite (Roman, 2nd century AD, Palazzo Massimo alle Terme, Museo Nazionale Romano, Rome). This marble statue, which has left Italy only once before, is a surprising work: On one side it appears to be a voluptuous, sleeping female, but on the other, it is male.

Aphrodite and the Gods of Love is sponsored by United Technologies Corporation. The catalogue was made possible by the A.G. Leventis Foundation. This exhibition is organized under the auspices of the President of the Italian Republic, in celebration of the 150th anniversary of the unification of Italy. Conservation support for objects in the exhibition was provided by the Leon Levy Foundation. Additional support provided by The Hellenic Women’s Club. The multimedia guide was made possible by the John and Sonia Lingos Family Foundation.

Complementing the exhibition is the catalogue •Aphrodite and the Gods of Love• (MFA Publications, 2011), which presents a comprehensive and scholarly appreciation of the goddess of love. It features more than 150 marble sculptures, painted vases, precious metals, mosaics, and gems, as well as contemporary depictions by artists such as Jim Dine and Fernando Botero.