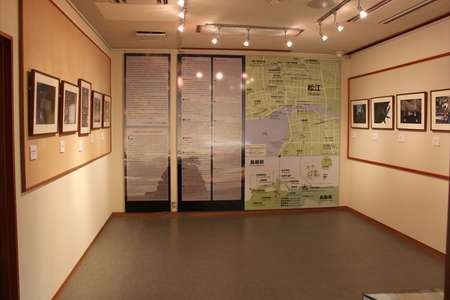 A museum in Matsue, Shimane Prefecture, started a year-long exhibition on Sunday to follow in the footsteps of naturalized Japanese writer Lafcadio Hearn, also known as Yakum Koizumi, through photographs.

Born to an Irish father and Kytherian-Greek mother in 1850, Hearn arrived in Japan in 1890 and married a Japanese woman in Matsue, where he lived for a while. He introduced Japan's traditional culture to the world before passing away in 1904 at the age of 54.

The exhibition at the Lafcadio Hearn Memorial Museu presents modern photos of scenes depicted by Hearn in his 1894 travelogue, ''Glimpses of Unfamiliar Japan,'' taken b Toshinobu Takashima, a photographer from Shimane Prefecture.

The travelogue is a collection of Hearn's notes during his trips mainly to Shimane and Tottori prefectures, western Japan, and includes many episodes about Matsue and its vicinity.

The exhibition, entitled ''A Journey to Glimpses of Unfamiliar Japan,'' will be presented in two stages.

The first, which began Sunday, is ''The Chief City of the Province of the Gods,'' focusing on places mainly in and near Matsue, such as the famous Izumo Taisha shrine.

The second, ''Travelling Hearn,'' opening Oct. 5, will deal with spots other than the Matsu area, like Okinoshima, a group of islands in the Sea of Japan, or Mt. Daisen in Tottori.

Sixteen photos by Takashima will be displayed in each stage to depict ''Hearn's world as it is in the modern world,' according to the museum.

''This is a collaboration between Hearn's spirit and my sensibility as a photographer,'' Takashima, 39, said. ''I was always thinking what Hearn would have felt in each situation, when taking the photos. It would be my pleasure if this event makes visitors know the world of Hearn.''

The first edition of ''Glimpses of Unfamiliar Japan,'' published by a New York-based publisher, and its German, French and Polish versions will also be displayed during the exhibition.

Shoko Koizumi, 51, wife of Hearn's great grandson, coordinated the event. ''I hope the visitors will go back and forth between the past and now through the photos,'' she said.

Koizumi is planning to use online services such as Facebook and Twitter to allow the visitors and those who are interested in Hearn to post impressions and share information about the exhibition as well as to urge them to actually visit the places introduced in the exhibition.