The National Hellenic Museum is America’s only national institution that interprets the American experience through the history of Greek immigrants, and the contributions of Greek Americans to the American mosaic, while celebrating their rich Greek history and culture and the profound impact of their Hellenic heritage upon the world.
Aereal View of Buildingclean

The Greeks laid the foundation for western civilization. Centuries later, thousands of Greek families immigrated to the United States and brought with them a rich culture and strong values. Now, everyone can explore and celebrate the timeless traditions and epic history of Greek culture at the all-new National Hellenic Museum.

The National Hellenic Museum is the first and only major museum in the country dedicated to the Greek journey, from ancient times to the modern Greek American experience.

Chicago has one of the world’s largest Greek populations. But Greek or not, this journey touches everyone. Greek history and culture is at the very foundation of western civilization, and continues to influence our lives to this day. Our government, language, architecture and theater all have their roots in ancient Greece.

Located in a new 40,000-square-foot space that is both contemporary and timeless, the Museum connects all generations—past, present and future—to the rich heritage of Greek history, culture, art and the Greek American experience. Since 1983, the National Hellenic Museum, previously known as the Hellenic Museum and Cultural Center, has been striving towards this mission. 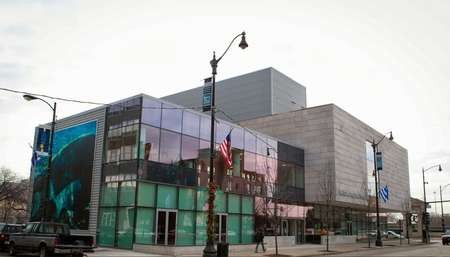 The National Hellenic Museum opened in its brand-new home on December 10, 2011. The Museum is a four-story, 40,000-square-foot-LEED-certification-pending building home to an extensive collection and archives of more than 17,000 artifacts spanning thousands of years. Visitors of all ages experience Greek history and culture through the words of storytellers past and present. Its interactive exhibitions, Library, Oral History Center, and Education Center showcase the contributions of Hellenism, Greece, and Greek Americans to the world.

The Museum is constructed with natural limestone and glass, materials that respond to the artistic and technological traditions Greeks have experienced from the Classical Age to the modern day. The building incorporates historic architectural references such as a covered walkway, or stoa, found in classical pagan structures and natural wood accents and elements common to Byzantine monastic structures. The symbolic heart of the new building is a dramatic, sky-lit east-to-west-staircase leading to the permanent exhibit that represents the immigrant experience, cultural ties to Greece and the limitless potential of Greek Americans in the United States. The Museum contains design elements associated with Aristotle such as earth, wind and fire. Although water is not physically present, light and glassy surfaces are utilized to represent the importance of water.

Demetrios Stavrianos is the National Hellenic Museum’s principal designer. Stavrianos is a principal at the Chicago office of RTKL, a worldwide architecture, engineering, planning and creative services organization. A Greek American, Stavrianos’ grandfather emigrated from Greece. He grew up on the south side of Chicago and knows Greektown well. Stavrianos drew inspiration for the building from Greek monasteries and “The Meteroa,” which means “suspended in the air” or “in the heavens above.” Other notable projects by Demetrios Stavrianos include: Riverwalk at Port Imperial (Weehawken, N.J.), US Capitol Visitors Center (Washington, D.C.) Food and Drug Administration Headquarters (White Oak, MD), Tangdao Bay Yach Club (Qindao, China), Cleveland Flats Master Plan (Cleveland, Ohio) and the Orland Park Main St. Triangle (Orland Park).