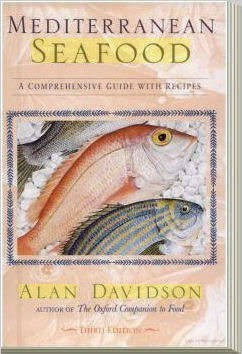 The late Alan Davidson (who sadly died at the end of 2003) had a distinguished career as a writer and publisher of books on food and cookery. His greatest achievement was 'The Oxford Companion to Food' (1999), but this was anticipated by his trio of books on seafood, of which this was the first (published in 1972), as well as studies of the fish cookery of Laos; an edition and translation, with his wife, Jane Davidson, of the 'Grande Dictionaire' of Alexandre Dumas, and even a novel, 'Something Quite Big', originally only samisdat, but finally exposed to the wider world in 1993.

Before turning to writing full-time in 1975, Alan Davidson saw wartime service in the Royal Navy Volunteer Reserve before entering the diplomatic corps with postings to Washington, The Hague, Cairo, Tunis and Brussels before his final appointment, as British Ambassador to Laos. 'Mediterranean Seafood' was indeed one outcome of his diplomatic travels, for the very first version of the book was designed to help his wife and colleagues unravel the linguistic puzzles encountered at the fish markets of Tunis.

This classic of modern culinary literature is at once a cookery book and a hungry naturalist's guide to the edible marine life of the Mediterranean Sea. First, there is the fully illustrated catalogue of fish and shellfish (not counting the sea slug and the sea anemone), complete with identifications of species in more than a dozen languages; then there follow more than 240 recipes drawn from the author's own experience and observation, from the advice of friends and family, and from the cookery literature of more than a dozen countries with a shoreline on the Mediterranean as well as on the Black Sea, its neighbour.

So much information, yet told in so beguiling a fashion: Alan Davidson's touch was of the lightest, always sweetening the pill of hard fact by a personal memory or a tale drawn from the byways of history or scholarship.

When the book was first published in 1972, it won the prestigious Glenfiddich Award for the best food book of the year. It has since been translated into five languages. This is a third revision, brought up to date for this edition.

Derek Cooper relishes a batch of authoritative books for the gastronome
With Christmas on the way I propose a fistful of books for food lovers, starting with two old favourites of mine now back in print. When Alan Davidson was a diplomat he was despatched to Tunis to represent the Crown. While there his wife, Jane, bewildered by the diversity of the catch in the fish markets, asked her husband to compile a guide to the marine life in that part of the Mediterranean.

It was little more than a Roneoed list, but a fellow diplomat was so impressed that he sent it to Elizabeth David, who wrote about it in her column in The Spectator. Jill Norman, who was then cookery editor at Penguin, persuaded Davidson to expand the original and it was published in 1972 as Mediterranean Seafood. It remained in print for a quarter of a century and became a classic. Now it is born again.

Mediterranean Seafood (Prospect Books, £17.99) is both learned and entertaining. It gives the names in seven languages of 150 species of fish and it offers more than 200 recipes from Mediterranean and Black Sea countries. Alan Davidson's great gift as a writer (which he deployed with consummate skill in his recent Oxford Companion to Food) is the ability to handle vast amounts of information without ever being dull. Prospect Books is also publishing Davidson's North Atlantic Seafood and his Seafood of South-East Asia. They make a spellbinding trilogy.