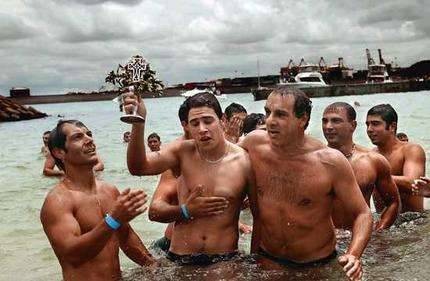 Blessed ... Harrison Ginis, 16, holds the silver cross he retrieved from Yarra Bay during the Greek Orthodox Church's epiphany celebrations yesterday. Tradition says it will grant his family a fortunate year.

A reminder to respect our earth, says Orthodox leader

The Greek Orthodox epiphany celebrations have always held special spiritual meaning, but none more so than yesterday.

For 16-year-old Harrison Ginis, who beat more than 60 competitors to retrieve the ceremonial silver cross thrown into the brackish depths of Botany Bay, it was the reward of a blessing that tradition says will grant him and his Kastellorizo-born parents a fortunate year.

For the head of the Greek Orthodox Church in Australia, Stylianos Harkianakis, mobbed by his Greek Australian congregation to kiss the cross he held aloft adorned with basil (the herb found growing on the original cross of Christ), the year held an ominous warning of humankind's abuse of the environment. In the 150,000 dead in the Boxing Day tsunami he could see man's destructive hand.

On January 6 or the nearest Sunday, the Orthodox Church celebrates the baptism of Christ by St John in the River Jordan, an act that encapsulates the theology of the Holy Trinity and symbolises the possibility of eternal life. During the church's blessing of the waters, adherents of the Orthodox faith receive sanctified water, which they use to bless their homes and gardens, or preserve for a time of illness or personal adversity.

At Yarra Bay, La Perouse, thousands gathered for a more public blessing, which takes place in rivers, lakes and pools in all corners of the Greek world.

It was the sea that turned on mankind in the Boxing Day tsunami - and while it was not God's will, or his wrath, Archbishop Stylianos told the faithful it was a direct result of humanity's misbehaviour and unsettling of the planet's equilibrium. "As a church leader I don't feel qualified enough to know what is God's will, but He has designed our earth as a living organism to certain rules, and there is a balance in nature," he said. "We have to expect ... if we abuse the earth, nature, we create problems. The earth can protest because it is a living body."

And so as Sydney's Greek community went to work raising more than $150,000 for the tsunami victims, Maria Ginis was contemplating buying a lottery ticket for Harrison - a son more blessed than most.