submitted by Kytherian Religious Consciousness on 18.04.2012 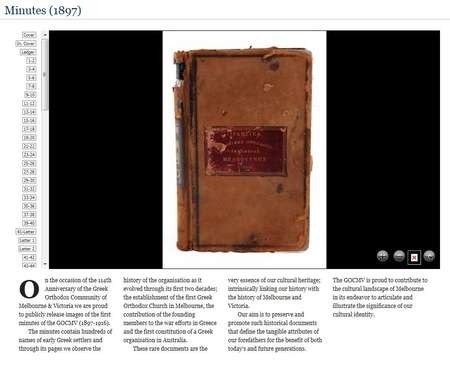 On the occasion of the 114th Anniversary of the Greek Orthodox Community of Melbourne & Victoria we are proud to publicly release images of the first minutes of the GOCMV (1897-1916).

Peruse the contents of the minute book at:

The minutes contain hundreds of names of early Greek settlers and through its pages we observe the history of the organisation as it evolved through its first two decades; the establishment of the first Greek Orthodox Church in Melbourne, the contribution of the founding members to the war efforts in Greece and the first constitution of a Greek organisation in Australia.

These rare documents are the very essence of our cultural heritage; intrinsically linking our history with the history of Melbourne and Victoria.

Our aim is to preserve and promote such historical documents that define the tangible attributes of our forefathers for the benefit of both today’s and future generations.

The GOCMV is proud to contribute to the cultural landscape of Melbourne in its endeavor to articulate and illustrate the significance of our cultural identity.