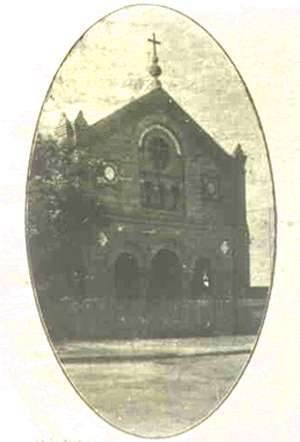 Where a more extensive collection of photo's, including many Kytherian-Australian photo's can be viewed.

Thanks to Maria Hill, for allowing us to reproduce Kytherian photographs at kythera-island

The Greek Community of N.S.W. initially established an organisation with the intention to build a church. The Holy Trinity Church was the first Greek Orthodox church to be established in the Southern Hemisphere in May 1898 by Greek and Syrian Orthodox Christian businessmen. The reason that Greek migrants built churches was because of their desire to preserve their religious beliefs and necessities, such as marriages, baptisms, funerals etc.

Until November of 1897 sixty two people donated 257 pounds towards the commencement of building the Holy Trinity Church. The names of those people are provided by Hugh Gilchrist (historian) in his book on the history of the Greek Community in Australia. It was a dream by Athanasios Kondnos to build the church. However, he died in 1897, one year before the foundation stone was laid in the presence of various Consul Generals such as of Greece (Markos Maniakis), of France, Russia, Sweden, Argentina and crowds of Greek and Syrian people. Amongst the first council of the Greek Orthodox Community of N.S.W. were two Syrians. For many years Syrians attended the church and for this reason the council of the community organisation had requested that the priest should have knowledge of both Greek and Arabic languages. From 1909 until his death in 1940 the Syrian businessman Abraham About was one of the trustees (custodians) of the Holy Trinity church and the Greek Orthodox Community's property. The majority of the Greek foundation members were from the island of Kythira.

The first Greek priest was Dorotheos Vakaliaros in 1898. In 1899 Father Serafun Fokas, came from the Patriarchy of Jerusalem. One of the aims for the establishment of the Holy Trinity church was that, the Greek people could meet and keep in touch with other Greeks. This was a means in which they could pass down to their children their culture, religion, language, customs and so forth. Through its church, the Greek Community could raise money, enabling them to give some financial assistance to those Greeks with specific needs such as deprivation and unemployment.