submitted by Kytherian Religious Consciousness on 16.02.2007

Icon Station, Chapel. First Floor of the Monastery at Geelong. 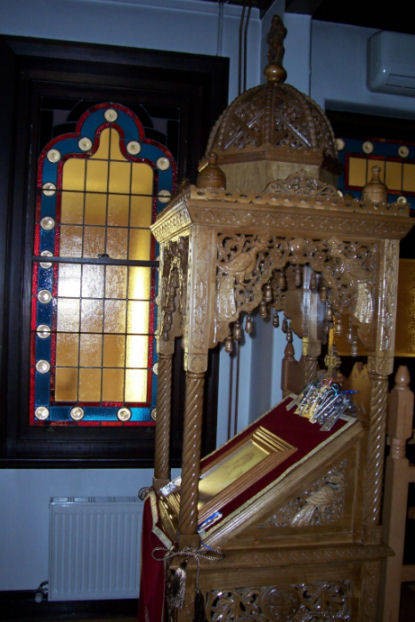 The Monastery is situated approximately one hour, by car or public transport, from Melbourne, in the beautiful seaside city of Geelong.

Geelong is the gateway to one of Australia's environmental treasures - The Great Ocean Road.

If you go the very large and attractive Information Centre in Geelong, and look due North, the Monastery lies 3 blocks away, on the hill.

To create privacy for the monastery, the direct route, Cox Road, the road running outside the Monastery, has recently been "closed off". This initiative was instigated by Mother Kallistheni.

The view back to the ocean from the high hill is magnificent.

Initially the Monastery stood on 17 acres of land, but subsequent land purchases, have extended the size to 20 acres.

It is a very substantial property holding.

Gorgoepikoos literally translates to "the all-hearing."

The Feast Days for the Monastery are

Programme of the Monastery

Pilgrims can visit the monastery daily (except Mondays, Wednesdays, and Fridays), and are able to attend the services chanted by the sisters.

"Pilgrims" are encouraged. The following testimony from Noura Cheded, at

is typical of the responses of many "pilgrims":

"I spent...5 days at the Holy Monastery of Panagia Gorgoepikoos, a Greek Orthodox Monastery for ladies in Geelong. On arrival I participated in an English Liturgy held at the Monastery. I enjoyed my stay with Mother Kallisthene and the sisters immensely. I had the opportunity to meet other Christian ladies who were staying at the monastery at the same time. We discussed our life in Christ and in the world, we prayed together, talked about books we’ve read, and worked together. It was truly a joy to meet them.

In such a busy world, a monastery is a great place to be able to relax and spend time to reflect, read and pray. Also not to forget to mention the invaluable spiritual advice you receive by talking with Mother Kallistheni and the sisters. I recommend a visit by ALL".

Refreshments are provided after the Divine Liturgy

(No barbecues or alcohol are permitted)

The Mother and her 3 Sisters take a very "hands on" approach to the maintenance of the property. They perform tasks that most men could not perform.

Most importantly they involve themselves in social justice issues, such as providing support for parishioners in Melbourne & Victoria, who live in poverty, are homeless, who have been abused, or been subjected to violence. They take on the "too hard" cases; often neglected by established agencies.

They perform these tasks with purpose, devotion & equanimity.

Mother Kallistheni's attitude is always -"can do".

Mother Kallistheni is a woman of presence, and gravitas.

The Holy Monastery of Panagia Gorgeopikoos was established by the Greek Orthodox Archdiocese of Australia in May 1993.

Pappa Vagelli as he was known was priest, (as well as the schoolmaster) in Karavas for four decades.
Most Karavites (and Kytherians from surrounding villages, such as Ayia Anastasia, Broggi, Petrouni, Plattia Ammos, and many more) aged between 100 and 60 - living in Australia, and the USA, would have been christened by Papa Vagelli - including almost all Karavites who attend the annual Karavitiko Symposium, in Sydney, Australia, on the Feast Day of Ayios Haralambos.

Learn more about the Karavitiko, and its history and iconography

We witness, therefore, the completion of a religious cycle.

This genealogy explains the relationship between Pappa Vagelli and Mother Kallistheni.

This Church is not related to the Monastery in Geelong, which bears the same name. However Kytherians, particularly those living in Athens & Pireaus, as well as diaspora Kytherians who visit Greece, may be aware of this iconic church.

The Panagia Gorgoepikoos Church in Plaka is not particularly attractive, but it is one of Athen's ancient treasures. From the 1100's this church has stood here as a beacon to those practicing the Orthodox faith. In the interwoven past of Athens, there was a temple on this spot named Isis-Eileithyia (Isis being an Egyptian goddess; ideas traveled through trade contact). The church has its own hidden treasure, as all historic sites do. The marble murals you will notice upon entering are more than decoration. At least one of the murals was commissioned hundreds of years before the birth of Christ and shows elements of Greek's old pagan culture.

This article has been written to introduce Kytherians in Sydney & NSW, other parts of Australia, and around the world, to the superb Greek Orthodox Monastery in Geelong Victoria, and to its Kytherian Mother Superior, or Abbess - Mother Kallistheni.

It has also been written to encourage Kytherians from around the world to "make the pilgrimage" to Geelong.

In 19th & 20th century Kythera, Kytherians who had spent some time in the Middle east were often given the parachoukli "hatzithes" - indicating that they had "undertaken the haj".

Will we devise another 21st century parachoukli for those Kytherians who make the "pilgrimage to Panagia Gorgoepikoos?"