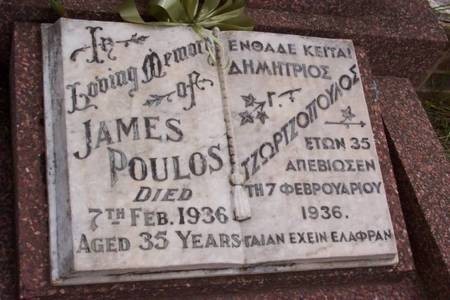 Born Karavas, Kythera, in 1901, Dimitri Tzortzopoulos Hlihlis, was tragically killed in a car accident aged 35, in 1936.

He is buried together with his brother Mina, in Goulburn, NSW, cemetery.

The circumstances of his life were tragic.

He established himself in Goulburn, where he owned a Refreshment Room in the main street.

Dimitri died as the result of injuries sustained in a car accident in 1936. He was travelling by car to go and see business he was wanting to purchase, in a neighbouring town, (West Wylong?). My father recalls that a fellow Greek in the car with him was severely injured - but recovered. This person later established a shop in Dubbo, NSW. Mrs Anastasia (Tassia) Varvaressos (nee, Zervis), later to "adopt" second eldest son Haralambos (Harry)- recalls that 2-3 persons were killed in this accident. Goulburn newspaper reports would establish the exact toll of the car accident.

Letter of Athena (Tzortzo)Poulos to mother-in-law Olympia, explaining the circumstances of Dimitri's death

Leaving 4 young children under 6 years of age - George, Harry, Con and Olympia (Ollie) - without a parent.

Panayoti, his brother, was recently arrived (1928), and only 22 years of age. And James's other 6 brothers and sisters were in Karavas, Kythera, or Pireaus.

An oral history told by Con Dimitri Tzortzo(Poulos), about brothers and sister, George, Harry, and Ollie