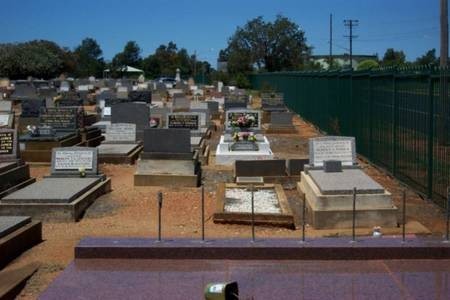 Looking East from the corner of Barden Avenue, and Myall Street.

The gravsite in the far western corner is a beautifully crafted 3-part marble topped gravesite [unmarked], with the horizontal part of the headstone, either removed - or not in place yet [hence the jutting steel reinforcing bars.]

The white patch in the distance (one grave site in from the fence) - is the childs' crib gravesite, which is the perfect location marker for finding Ollie Poulos's gravesite.