If you thought that computers were a modern invention, then it’s time to throw your preconceptions right out of the window and be wowed by a device that’s believed to be at least 2,000 years old.

The Antikythera Mechanism was discovered on the Greek seabed by sponge divers in 1901 and is the world’s oldest known analogue computer. Although it’s been reliably dated to between 150 and 100 years BC, the experts reckon that it wasn’t the prototype because it was so sophisticated.

So, even before this fabulous device was being used by ancient scientists, it’s likely that even earlier forms of computers had been created to track the Sun and Moon, calculate the positions of the planets in the heavens and work out when eclipses were likely to occur. How or why we lost the ancient knowledge that went into creating the mechanism, no one knows; mankind didn’t produce anything else as technologically advanced as this for another 1,500 years.

In fact, the latest research published in December 2014 in the Archive for the History of Exact Sciences has suggested that the device may be even older, with new information adding somewhere between 100 and 150 years to its age.

In this Billionaires investigation, we’ll take a closer look at the discovery of this awesome object and what some remarkable brains in the ancient world designed it to do.

The mechanism was found by divers looking for sponges off the wreck of an ancient ship near the Greek island of Antikythera, from which the device takes its name. At first, it was overlooked as teams from the National Museum of Archaeology in Athens concentrated on the other finds recovered from the wreck, including coins, statues and pottery. What was to be the greatest discovery from the wreck just looked liked a corroded piece of metal embedded in a rock.

But then one of the team noticed what looked like a gear, and suggested it may be an astronomical clock. His theory was pooh-poohed though, because everything else from the wreck predated such developments by centuries.

The mechanism lay in the museum for another 50 years before a new generation of researchers decided to try to work out its secrets. And it wasn't until the start of the 1970s that x-rays revealed just what was inside that lump of bronze and rock and astounded the world’s scientific community.

A team led by Derek J de Solla Price from Yale University discovered that the mechanism was in fact a complex machine with gears to track the movement of planets and stars, and calculate changes in the heavens. It completely shook up the scientific establishment, because nothing else of this complexity has been found before the astronomical clocks that were produced in the 14th Century. It is, according to Prof Michael Edmunds of Cardiff University, “more valuable than the Mona Lisa”.

What was it for?

The mechanism is in more than 80 fragments, although there could have been more that have been lost down the centuries. X-rays revealed 30 different bronze gears inside a wooden box, with detailed ancient Greek inscriptions on each of its two faces.

The front face, or dial, is marked off with the 365 days of the year on an outer circle, and the Greek signs of the zodiac are shown on an inner circle. It also shows the Moon and the five planets that were then known in the ancient world. Pointers could be lined up with the Moon and the Sun and their positions tracked around the year.

On the back, there are five dials, one of which scientists believe was used to calculate when the ancient Olympic Games were held. 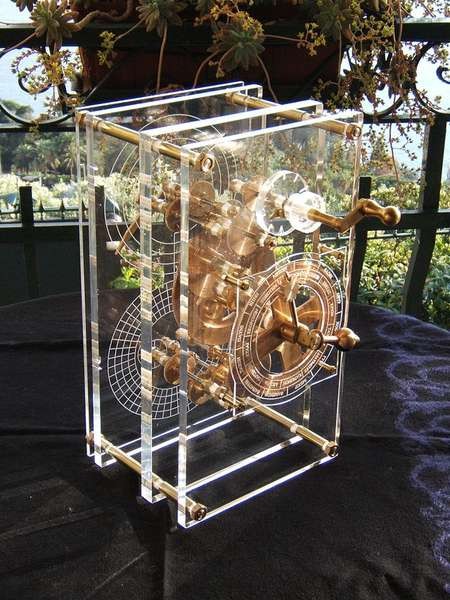 In 2007, a reproduction of the mechanism was made by Mogi Vicentini.

And you can see computer generated reproductions of the front and back faces that were created by Tony Freeth for the ongoing Antikythera Research Project, which is continuing to analyse the mechanism and its mysteries:

The special research project was launched in 2005 to bring together international academics, with the backing of technology companies, to see what other secrets can be uncovered from within the Antikythera Mechanism.
We don’t yet know what else will be revealed by this astounding piece of ancient technology, but as our own technology advances, scientists are finding new ways to explore and assess the Antikythera Mechanism.

Who knows, this ancient computer may still have undiscovered mysteries to reveal that will again put our modern assumptions about ancient man into a tailspin.