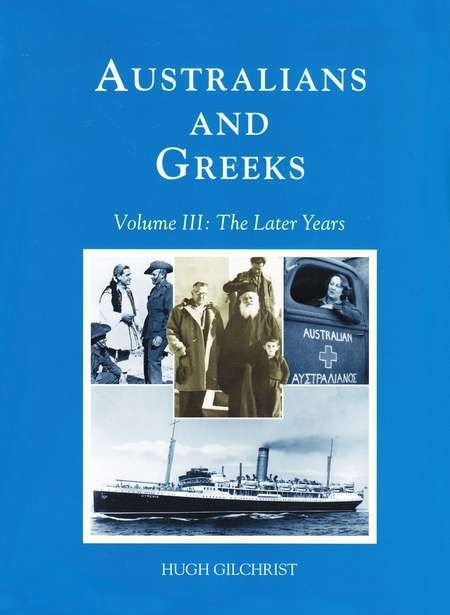 The final volume in Hugh Gilchrist’s multiaward winning survey of all the connections between two nations is full of the same superbly objective history and colourful stories as the other two. It covers the Greeks and Australians in World War II, and the post War era of migration and diplomacy. Richly illustrated and indexed. 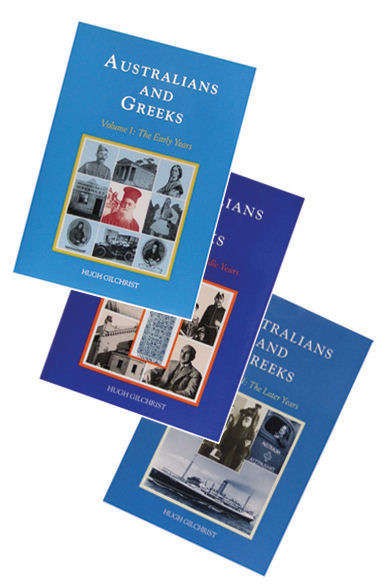 Price: A$60 each incl GST and air post and packing to anywhere in the world.

The book can also be ordered from all major bookshops, if you provide the publishing details that are advised above.

This is the third and final volume of an exceptional work, which brings to a close 35 years of research in both Greece and Australia by former Australian Ambassador to Greece, Hugh Gilchrist. Those readers who have been waiting for this publication won't be disappointed. Like Gilchrist's first two volumes for which he earned critical accolades, Volume III is also a significant and highly readable account of aspects of the historical relationship between Australia and Greece. It is an impressive work. The third volume begins in 1939 and covers one of the most significant periods of relations between Australians and Greeks: An age of war and migration — when world crisis brought Greeks and Australians into intimate contact. Gilchrist's book is about the relationships in both directions between Australians and Greeks.

A comprehensive appendix records nearly a thousand Australian Greek men and women who fought for their adopted country in World War II. There is also an extensive list of Australian war dead from both World Wars. It reports heroic exploits like those of Angelo Barbouttis — who destroyed two barges full of Japanese soldiers in New Guinea.

Australians and Greeks, Volume III, thoroughly traces Australian attempts to relieve the appalling poverty of war-devastated Greece, through United Nations agencies such as UNRA, UNICEF and WHO and through the Australian Red Cross and Jewish medical teams which worked in Greece after the war. Gilchrist graphically recreates the dismal conditions of post-war Greece. Australian efforts to reunite with their parents the children taken into Communist countries during the civil war are also traced. Also related is Australia's role, through the United Nations, in monitoring Greece's northern frontiers from 1947 to 1952 and in trying to mediate between Greece and its northern neighbours.

Greek Australians making their mark in the professions and other walks of life are considered. So are aspects of Greek society in wartime and post-war Australia — the Church, the press, education, politics and social life. The intricacies, features and developments within Australia's Greek communities receive broad coverage. Some readers may have hoped for more detail in this regard and could be disappointed, but then this isn't the intent of the book. Though meticulously researched, fluently written, and well crafted, this is not a typical ethnic history. Rather, it is primarily a military, political and diplomatic history of the relationships between two countries and their people.

Other topics include the now defunct Greek-Australian League, Australian war graves in Greece, the Athens war memorial to British, Australia and New Zealand war dead, the resumption of migration, and the polarisation of Greek-Australian politics during the civil war as seen with the League for Democracy in Greece.

The post-war period was one of growing trade, travel and communication; Hugh Gilchrist surveys these economic relations. He records the Greek ships which came to Australia — many sunk in the war, others bringing migrants to a new home. Immigration programs brought large numbers from a troubled post-war Greece. Yet, while thorough in its coverage of the establishment of an immigration mission in Athens, the negotiations pursued for the creation of the ICEM Assisted Passage Agreement between the two countries could have received more attention. The mass migration period is outside the scope of this work, but the intense debates surrounding the Agreement are deserving of consideration.

This book goes through to the establishment of Greece's permanent diplomatic mission in Australia in the 1950s. The work ends in 1953 because that is when Greece's first Minister (later Ambassador) to Australia, Dimitri Lambros, presented his credentials, opening a new period in Greek-Australian relations. As with Volumes I and II, Gilchrist's referencing could be more helpful. Certainly very comprehensive, the chapter endnotes are not identified numerically. This is not to say the references are not valuable for other researchers, but by not matching references to a number they become frustrating.

Gilchrist has created a monumental and praiseworthy work of three volumes, which will be treasured not only by historians but also by the community at large, both in Australia and Greece. One can be assured that the contents of this invaluable reference book will enlighten the reader about Australia's ties with Greece and Greece's relationship with Australia.