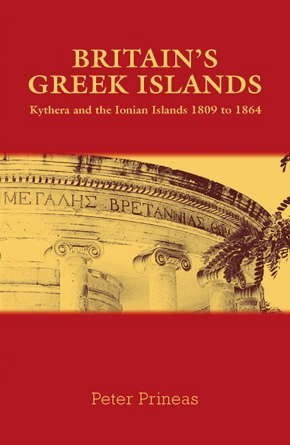 Front cover of the book:

'BRITAIN'S GREEK ISLANDS' was launched by Associate Professor Vrasidas Karalis of the Department of Modern Greek at Sydney University's Nicholson Museum on 14 October 2009. Professor Karalis has described the book as 'a labour of love, meticulously researched' and 'a fascinating personal account of the Seven Islands which were "British" before becoming Greek'.

The book tells the story of five decades in the early nineteenth century when the British ruled Kythera and the Ionian Islands. It is a very readable history, painstakingly assembled from hundreds of hand-written letters and documents, most previously unpublished.

It conveys the texture and detail of life, society and politics in the island of Cerigo (Kythera) and the Ionian Islands (then known as Corfu, Paxo, Santa Maura, Ithaca, Cephalonia and Zante) and illuminates important but largely forgotten events.

Based on extensive research in the archives, and illustrated with maps, photographs and historic prints, 'Britain's Greek Islands' reveals the sometimes turbulent relations that existed in the Protectorate named the 'United States of the Ionian Islands'.

The narrative is placed within the wider history of Europe and the Near East, from the Napoleonic Wars, through the Greek War of Independence, the Crimean War, and conflicts over the 'Eastern Question' that resonate to this day.

'BRITAIN'S GREEK ISLANDS' is also available from selected bookshops, including Gleebooks and Abbeys in Sydney.