submitted by Kytherian Cultural Exchange on 19.12.2011

Crossing the ditch. The DVD 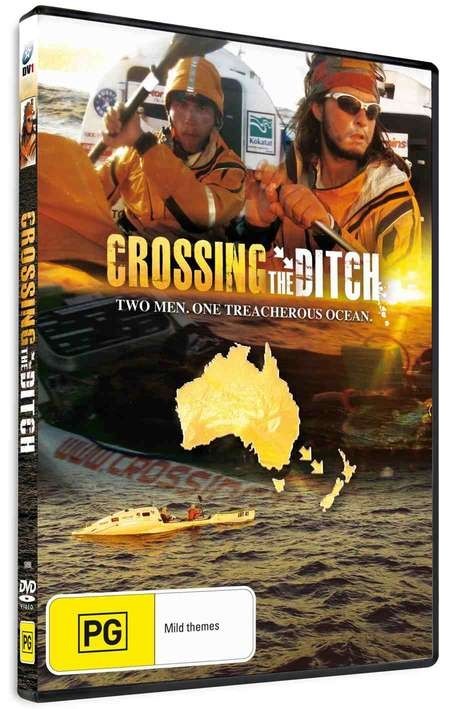 To pick up a copy you have two options:

2) Get your signed copy direct from us!! All our proceeds are going towards our next expedition. CLICK HERE

Channel 7 to show the Doco and NEW DVD!!

The Crossing the Ditch doco was picked up by Channel Seven and Seven Two. It aired at:

I'm glad that it's finally on a network and happy that Seven have picked it up...my only tiny little gripe is that we had to cut it down to a 44minute cut. It's quite hard to condense 3.5years of preparation, planning and paddling into such a sort timeframe...which brings me on to my next point!

There is a new version of the DVD out for sale!!!

As you probably picked up from the new DVD cover above, the Crossing the Ditch DVD has just had a dramatic make-over. We've partnered up with DV1 (http://www.dv1.com.au/) to create a new doco with tonnes of juicy features including:

- 45 minutes of extras including video diaries, deleted scenes, podcasts, pictures and of course the answer to the most asked question we ever get: How did we go the bathroom!! (It is an absolute must watch...see James squeal like a little schoolgirl!)

To repeat: To pick up a copy you have two options:

2) Get your signed copy direct from us!! All our proceeds are going towards our next expedition. CLICK HERE

***This is the documentary that was produced about Crossing the Ditch (Ditch would be translated as lagathi in Greek, and is colloquial language used to refer the expanse of water, the Tasman Sea, which lies between Australia and New Zealand). The documentary won it's category for best film on adventure and exploration at the Banff Mountain Film Festival in Canada - the "el primo" outdoor film festival in the world! Cass expressed “a big thanks to the crew from Quail Television for helping this all happen, especially Greg Quail and Doug Howard who saw the merit in our expedition and made it possible for us to share our little trip with the rest of the world”!

Kendal's Brewery Arts Centre, the main venue for the Kendal Mountain Festival
More than 7,500 people are estimated to have attended the festival over the November weekend to watch films ranging from high-level mountaineering epics, to behind-the-scenes looks at the production of nature documentaries in high environments, as well as listen to a host of speakers. Now in its 12th year, the festival featured 61 films totaling 150 hours, covering a wide range of outdoor and adventure subjects including climbing, mountaineering, mountain biking, kayaking, culture and exploration. Cas (James Castrission’s “nick name is Cas), and Jonesy’s efforts to be awarded the Grand Prize against such illustrious competition is extraordinary.

The DVD is a must have for every Kytherian library around the world.