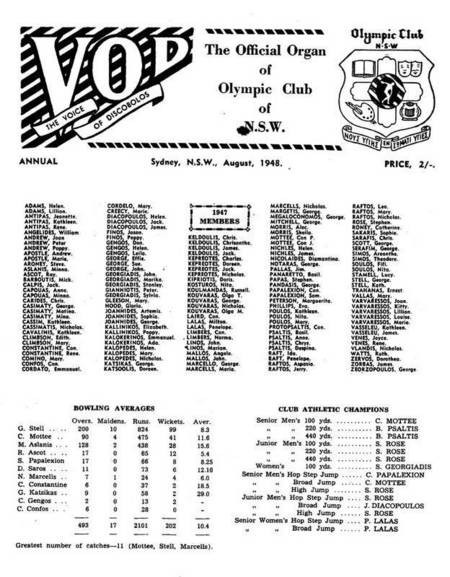 Through Nick Fisher’s connections in Sydney, Melbourne Olympic Club (MOC) members travelled to Sydney to play against Greek youth in Sydney who, up until then, had not formed a sporting club but who met on the weekends at Queens Park, Bondi Junction, playing rugby league and cricket. During the Christmas period of 1945, 15 members of MOC competed against Greek youth of Sydney in cricket, athletics and table tennis. After travelling by train to Sydney, MOC were picked up by their billets, as organised by Cypriot Aristedes. Kastellorizans Con Mangos and Con Kanis were billeted out with Kastellorizan relatives. GOCS hired the services of sporting coach Roy Ascot to guide the sporting proceedings. Ascot, a non Greek, eventually became full-time salaried coach for SOC. On 26 December 1945, MOC practised at Rushcutters Bay Park for the cricket match which took place the following day. This occasion marked the first interstate official cricket match between Greek youth clubs in Australia. MOC easily defeated the Sydney select team, before a round of social activities including a visit to church and a farewell function at Archbishop Timotheos’ house prior to their departure.

Given the example and success of MOC, Greek Orthodox Community Sports, (GOCS) was now motivated to form their own properly organised Greek youth club.64 In February, 1946, a steering committee was set up, consisting of senior members of the GOCS, including Andrew Aristedes and Jack Angelides. After the hiring of coach Ray Ascot, a general meeting at Agia Triada Church was called for 27 February 1946 to elect a committee and ratify a constitution. [1] Second generation Kytherans, Con Mottee, Nick Marcells, Bill Psaltis and Ithakan Leo Raptis who was president for the first three years were the main proponents of the new club. Raptis, although only 22 years old was already on the GOCS committee. By early 1946, SOC were playing cricket at Rushcutters Bay against each other. Their first trial game took place when they beat North Katoomba by 180 runs. The game was organised through the efforts of the GOCS and Peter Tzortzopoulos, co-owner of the Niagra and Savoy cafes in Katoomba and a prominent member of the Katoomba golf club. Apart from gaining wide publicity from the local Katoomba newspaper Advertiser the whole management of the GOCS were present including president of the committee, Arthur George. [2] Later that day at the Greek owned Niagra Cafe, the GOCS committee presented the players with white shirts embroidered with the emblem of the SOC. It read “Sydney Olympic Athletic Club” (founded 1946 by the Greek Orthodox Community NSW).

In the 1946-47 cricket season, the SOC entered a cricket team into competition, registering their first win in the Metropolitan Churches Centennial Park Cricket Competition defeating Prescott outright. [3] In 1946, the club organised a dance at the Paddington Town Hall, to raise money for the team going to Melbourne to play the MOC in the Christmas break. This first Melbourne interstate visit involved contests in cricket, track and field and tennis. The team left Sydney on 23 December 1946 and returned 3 January 1947. A two day cricket match at Como Park saw the defeat of SOC team captained by George Stell, formerly of the Paddington Police Boys Club coached by Cohn McKould.

Sporting exchanges between the two clubs increased, the most successful being during the Christmas season of 1949, when SOC defeated MOC, for the first time and won the Hellemc Shield, donated by the Hellenic Club NSW, as they had been victorious in three of the five events. SOC defeated MOC in cricket at Moore Park (Fisher Shield), table tennis at St. Sophia School Hall (Angelides Shield), and swimming at the Coogee Aquarium. MOC won both tennis at Waverly Park (A.T. George Shield), and athletics at Redfern Oval (Polites Shield). New Year’s Eve celebrations and Presentation Night were both held at Paddington Town Hall.

Not until the 12 April 1952, did females of MOC and SOC compete at Moore Park in Sydney with the MOC team winning the netball match (22-10). From SOC’s inception until 1951, the club played predominantly Rugby League, cricket and netball, with their annual games usually taking place during the Australia Day Long Weekend period in January. The annual games also served as selection trials for the interstate visits, and were held at athletic tracks with spectators.

The official organ of the SOC was its monthly VOD (Voice Of Diskobolos) which first appeared in June 1947, its first editor being Nick Marcells. The club’s shield appeared on the front of the magazine with the slogan “healthy mind, healthy body”. [4} Every issue proclaimed that:

Apart from sporting articles, the magazine printed articles on literature and art. The regular 16 page issue was distributed by mail to subscribing club members. The club’s social events which invariably took the form of social dances were advertised. Monthly dances were usually held at the Coronet on George Street. The annual ball and the two presentation nights (one for the summer sports season and one for winter sports season) were held at the Paddington Town Hall. At the presentation nights, trophies were presented to the various teams and athletes by the Archbishop, speeches were made by senior members of the Greek society and there were very few females in attendance.

A typical year of the activities of the club was 1949, with two teams in the cricket competition. Similarly to the situation with MOC, the SOC cricket teams were the most significant of their teams. After winning the Eastern division, the SOC team entered the final of the Churches’ Cricket Union C grade Competition where they played against the winners of 12 other divisions. The C grade junior cricket team won the state premiership, defeating 104 metropolitan teams, and talented players were Con Mottee and George Stell.
The netball team defeated Maroubra in the NSW Premiers Association. The team was made up by J.Varvaressos, T.Stanley, M.Marcels, L.Coombes, N.Limbers, L.Varvaressos, K.Casimaty, I.Rafty and D.Katsoulis. Social events organised by female members included two reviews, a production of their original musical comedy Sproxenia, written by George Stell, a fancy dress ball and monthly dances.

By 1951 the club celebrated its fifth birthday with an artoclassia (a religious celebration: blessing of the bread) at the Holy Trinity Church on 2 December, 1951, the ceremony performed by Archbishop Theophylactos. The first annual ball was held at the Roman Showboat on 4 December, 1951.

Yet new immigrants were not attracted to club membership. An essay competition, “How to bring old and new Greeks together and the best way to do it” was organised and sponsored by the GOCS. Prominent members of the community were the judges.69 Still the club was unable to attract post-War new arrivals and SOC remained interested in only the second generation (Australian born) Greeks.

With news of MOC’s visit to Sydney in 1945, a meeting was called to select players for the Sydney team. [6] Kastellorizan Johny Johns believed that coach Ray Ascot discriminated against and excluded Kastellorizan youth. Johny Johns informed the Kastellorizan society of this and a meeting was called at Jack Charamis’s “PLEASU” city cafe attended by about 100 Kastellorizan youths and priest George Kateris. This meeting elected Angelo Karp, a WWII airforce veteran as a steering president. Subsequently Karp recommended that both youth clubs (KSC and SOC) amalgamate, but members of the club rejected the proposal, so he resigned. The first committee included Jack Charamis (president), Con Vallianos (vice president), John Economos (secretary) and George Alexiou (treasurer).

Rugby league was the chosen game as many of the boys were familiar with the sport as they had played the game at state primary and high schools. For example Luke Lucas, Basil Anthony and Con Vallianos had attended Cleveland Street Junior High School. Most of the boys knew each other from Saint Sofia Church and the Greek school. For the first few months, the team trained twice weekly at Queens Park under coach Johnny Johns. [7] He had been an avid Rugby League player and supporter in his youth.

The first KSC team formed was a Rugby League team which played its first game on 29 April 1946 when it defeated the John Hunter Shoe Company, a work place team, at Arncliffe Riverside Park. George Netes, an employee of the shoe company had organised the game.

In its first year, the team played against any team available, including once, a side of jockeys. Johnny Johns, a provedore at the fish markets, was successful in obtaining the coaching services of former Rugby League Kangaroo International player Joe Pearce.........(end, bottom, page 155).

Dr. Steve Georgakis is a second-generation Australian, born in the Sydney suburb of Balmain, the son of immigrants from Epiros in Greece. Educated at Fort Street High School and the University of Sydney, he followed a First-Class Honours degree in Education (Human Movement and Health) with a PhD in Education. In earlier years Dr. Steve Georgakis played professional soccer with Sydney Olympic SC and the Marconi SC. Between 1986 and 1992, he represented Australia in successively the Under 16, the Under 20, and the Olyroo national teams. For two years he was an associate lecturer and in 1999 he was awarded a post-doctoral scholarship, in the Faculty of Education at the University of Sydney.

Membership of the club for 1947, indicates that the preponderance were of Kytherian origin.