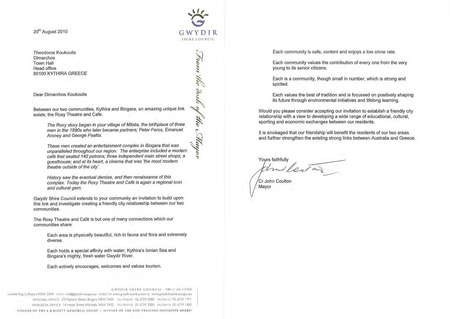 Anglo-Australians, through all 3 tiers of Government, have, over the past 6 years, spent in excess of $3 million restoring what is ostensibly a Kytherian Cinema, and a Kytherian Cafe in the North West NSW Country town of Binagara. They have also created a Greek-Australian Cafe Museum - which is primarily a Kytherian Museum. (See numerous links to the history of the Roxy, below).

The history of the establishment of these very significant buildings has been laid out clearly by Peter Prineas in his book, Katsehamos and the Great Idea.

What this does is ensure that Greek / Kytherian - Australian cultural “shrines” are extant for at least half a century, and probably beyond. The scope, power and quality of this Project is incontrovertible. The Roxy is a beautiful, living, working memorial to the Hellenic and Kytherian “shop-keeping phenomenon”, as Hugh Gilchrist called it in Australians and Greeks. As knowledge about the Roxy grows amongst Greeks and Kytherians in Australia and around the world, the Roxy will become a place of pilgrimage.

The Roxy has been an extraordinary success, and has made the town of Bingara the premier cultural hub of the North West of NSW. (It is a hub for much larger towns such as Tamworth and Armidale, which do not have the cinema's multi-purpose facilities). Much of the success can be sheeted home to the faith, diligence and courage of the Manager of the Roxy, Sandy McNaughton.

As a result, the Mayor of Gwydir Shire, Councillor John Coulton, was moved to write a letter to the Mayor of Kythera, proposing the establishment of a sister-city relationship between the two Municipalities.

Download a .pdf version of the letter in English:

Download a .pdf version of the letter in Greek:

This proposal was debated by the Council of Kythera in September 2010. The motion was embraced by all factions of the Kythera Council, Nea Demokratia, PASOK, and the Independents, and was passed unanimously.

George C Poulos was present at 12:30 am when this occurred, and thanked the Council of Kythera for displaying such foresight and courage. He also indicated to the Council members that, as they learnt more about the Roxy Complex, and its history, and future prospects, as Kytherians, they would become increasingly proud of what had been accomplished in Bingara by the Gwydir Shire.

He also pointed out that this established a link between Kythera and an agrarian Council in Australia, and he hoped that a further link would soon be established with a city Council in Sydney, namely the Kogarah Shire Council, whose chambers adjoin the Church of Myrtidiotissa. They all indicated that if a similar proposal as that of Gwydir Shire came before the chamber, they would look upon it very favourably.

All were certain that as the relationship between Gwydir and Kythera, developed and deepened, immense benefits would accrue to both partners. We all await this very exciting eventuality.

Katsehamos and the Great Idea

Overview of the history of the Roxy, published in the Royal Historical Society magazine