History > Documents > Visitors looking at the sculpture of the river god Ilissos, one of the Parthenon Marbles, at the State Hermitage Museum in Saint Petersburg on December 5.

Visitors looking at the sculpture of the river god Ilissos, one of the Parthenon Marbles, at the State Hermitage Museum in Saint Petersburg on December 5. 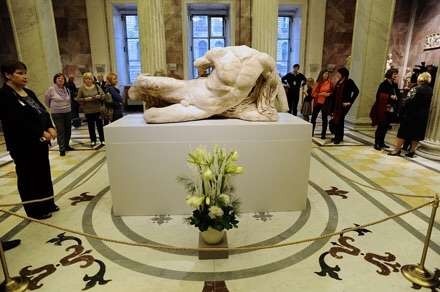 The Empire museum strikes back

The “loan” by the British Museum of a sculpture from the Elgin Collection of the Parthenon Sculptures to the State Hermitage Museum in Russia has created considerable furore around the world and amongst activists who want to see the Parthenon Marbles returned to Greece. But the secret dealings surrounding the placement of the sculpture on temporary exhibition in St Petersburg reveal a lot more about the strategy and sophistry of the British Museum and should serve as a wake-up call to Greece that mediation with the British over the return of the Parthenon Sculptures will never succeed.

Ilissos is a headless reclining sculpture of marbled immortality that sat for centuries at one end of the western pediment of the Parthenon. This sculpture together with other figures and water deities depicts the battle between Athena and Poseidon over Attica.

As the curator of the Greek and Roman collections at the British Museum, Ian Jenkins, has written, one of the hallmarks of the Parthenon sculptures is the “way they lead the eye from one to another, each figure or group of figures drawing energy from the previous and passing it on the next.” That applies equally to the frieze and the pedimental sculptures.

So why send a solitary sculpture to the Hermitage Museum in St Petersburg on the Baltic, and for a limited time only? The official reason is that the loan is a “birthday present.” According to the British Museum’s director, Neil MacGregor, when the Hermitage asked the British Museum Trustees if they could make an important loan to celebrate its 250th anniversary, the trustees immediately answered “yes.” MacGregor goes on to claim that “no loan could more fittingly mark the long friendship of our two houses, or the period of their founding, than a sculpture from the Parthenon." Moreover, he claimed that the Greeks should be elated at the spectre of Greece’s “stone ambassador to the world” on display on a solitary plinth in the Hermitage.

Really? The temporary loan of one pedimental sculpture from the British Museum’s extensive collection is nothing more than a gimmick that reflects a consistent pattern of historical revisionism employed by the British Museum and its acolytes. The British Museum was established in 1753 at the height of the Empire. Since 2002 it has consistently tried to rebrand itself as a universal museum encompassing the so-called “collective memory of mankind.” At the behest of MacGregor, in October 2002 the British Museum and various other major institutions, including the Hermitage, issued a self-serving declaration on the “importance and value of universal museums” decrying the alleged threat to the integrity of universal collections posed by demands for the restitution of objects to their countries of origin. In other words, we will say or do anything to keep the Parthenon Sculptures.

MacGregor continues literally to attempt to erase the Greek origin of these sculptures by insisting that the Parthenon Sculptures now in London tell a different story to those in Athens and that they have, in effect, no contextual relevance to the Acropolis. Ian Jenkins, when speaking at the “Body Beautiful” exhibition in the Victorian town of Bendigo in August 2014 reaffirmed that the museum regards the Elgin collection of Parthenon Sculptures as mere art objects which are now physically, spiritually and historically detached from the Parthenon. As far as the British Museum is concerned, the sculptures are no longer architectural ornament but objects d’art which have acquired a new meaning as part of the museum’s self-legitimating narrative.

So it is only natural that the British Museum seeks to justify its position by placing fragments in other collections. The museum had previously announced its intention to stage a “Greek Body” exhibition in May 2015 and the river god now at the Hermitage was to be moved there to be part of that exhibition. When I confronted Jenkins about that proposal, he responded by accusing the Greeks of “Elginising” the surviving sculptures on the Parthenon over the decades through their removal and eventual relocation in the Acropolis Museum. And then, almost imperiously, he declared “I will be taking some of the Parthenon Sculptures for the ‘Greek Body’ exhibition for the purposes of comparison.”

As for the Hermitage “loan,” we are informed that the whole idea was a birthday surprise for a brethren universal museum and, according to Sir Richard Lambert, chairman of the Trustees of the British Museum, the deal was literally approved at the last minute as they wanted to “leave room for flexibility if the political relationship between Europe and Russia changed.”

International inter-museum art and sculptural loans are very delicate and complex arrangements that are not finalised on a whim or at a moment’s notice or under a veil of secrecy. Here we learn that it was a clandestine operation to remove the sculpture from the British Museum under the cover of darkness and air freight it to Russia as if a covert military exercise was under way. Even the English version of the Hermitage’s web version still does not reveal what the ”masterpiece” from the British Museum is.

And how will the sculpture in the Hermitage be viewed? All you see is the river god Ilissos mounted on a plinth, surrounded by walls of artificial marble and located as a solitary fragmented object, alienated from its archaeological and sculptural context. In these conditions, how can anyone truly be confronted by the immortal “Grecian grandeur” and magnitude projected by the Parthenon Sculptures which so captivated a young Romantic poet, John Keats, whose sylvan historian could only enquire, “What men or gods are these?”

And MacGregor is certainly being disingenuous when he claims that the placement of this sculpture in St Petersburg will act as a stone ambassador for Classical Greece. There was no advance notice or promotion given of this exhibition. As Eric Gibson wrote in the Wall Street Journal, museums normally break news like this months in advance to publicise such an event. But in this case, it was an “unprecedented state of affairs” that by the time the news was out the sculpture was already at the Hermitage and ready to go on public view the next day.

Interestingly, Neil MacGregor is also the chairman of the Internal Advisory Council of the Hermitage, which includes the NSW Art Gallery’s Michael Brand and Francoise Riviere, assistant director-general for culture at UNESCO. That council met in August this year according to the Hermitage’s website. It stretches credulity that the proposed loan of the Parthenon sculpture was not discussed, let alone ratified, at that or any subsequent meeting of the advisory council.

This was not a loan for art’s sake, but a cynical gesture aimed squarely at the Greeks who in recent times have been agitating for a negotiated resolution of this centuries-old cultural dispute.

The Greeks have labelled the decision to lend one of the Parthenon Sculptures as provocative and insulting, particularly at a time when Greece has since June 2013 called on Britain to agree to mediation under the auspices of UNESCO. Mediation or any form of consensus-based resolution will simply not work if one party is unwilling to act in good faith. Not only have the British failed to respond to the request for mediation but MacGregor has declared that UNESCO “is an intergovernmental organisation but the trustees of the British Museum are not part of the British government.” That is simply playing semantics. For more than two decades at meetings of the UNESCO Intergovernmental Committee for Promoting the Return of Cultural Property to its Countries of Origin or its Restitution in case of Illicit Appropriation, the British Museum has been represented – indeed, it is fair to say that it is embedded within the UK Ministry of Culture – and has in fact orchestrated the predictable British response.

In the latest issue of Hermitage News, Hermitage director Mikhail Piotrovsky triumphantly declares that the Hermitage Museum “is not an object of cultural heritage, it’s an object of culture.” In its website the museum graciously acknowledges that the sculptures of the Parthenon are considered to be the pinnacle of human artistic achievement. And yet whilst it may possess a magnificent art collection, the Hermitage Museum has allowed itself to become an object of the Elgin marbles-driven universal museum myopia which, according to the MacGregor doctrine, will tolerate fragments of the Parthenon Sculptures being disassembled and displayed on their own and devoid of their proper context anywhere in the world, except in the place where they were conceived and executed to perfection: Athens, Greece.

In the Parthenon Sculptures the immortality of the Athenians as declared by Pericles in his famous funeral oration has been achieved. They are inextricably linked to the Parthenon which they once adorned and to the story of Athens. Dispersing fragmentary pieces to distant museums is pure tokenism as the British Museum merely restates the obvious, namely, that it can do as it pleases with the spoils of empire.

As the respected art commentator Jonathon Jones recently proclaimed, it is Greece and not the British Museum that deserves to be the custodian of the world’s greatest art for the world.

And so the Greek government must finally and decisively disabuse itself of the idea that the marbles can somehow be regained through diplomacy and mediation. Litigation in the international courts is now inevitable to try to reclaim the marbles and finally bring them home.

* George Vardas, Researcher, Australians for the Return of the Parthenon Sculptures