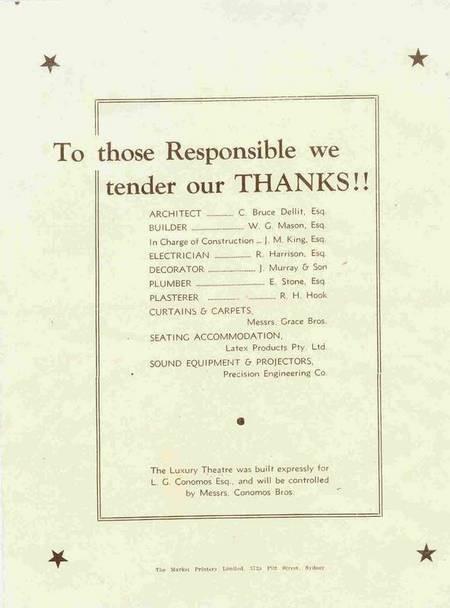 The Luxury Theatre was built by the Conomos Brothers to replace their operation in the School of Arts Hall. The Luxury opened in April 1937, with the film Born to Dance. It was licensed 30.4.37 to seat 500.

The theatre was quite large, being three storeys high, with a dress circle. It cost £8,000 to build, using 375,000 bricks. Architect was Bruce Dellit, of the Sydney Liberty and Minerva fame, as well as the Hyde Park Memorial.

Builder was Jack King, and the contractor Bill Mason. The theatre was in art deco style, with gold velour curtains supplied by Grace Bros, Broadway. On opening night they actually squeezed 1,100 into the theatre, despite its capacity of 500.

CinemaScope was installed around 1955, and Bausch and Lomb lenses used.

The theatre remained under their control until it was destroyed by fire in 1979, in a conflagration that took all that side of the main street with it, the fire getting completely out of control.

Note that all those who contributed to the building are listed on this programme.

Les Tod is a cinema historian. His contributed to the preservation of "Kytherian" and Hellenic Cinema's in NSW has been alluded to in other entries. Particularly influential was a report he co-authored with Ross Thorne and Kevin Cork, to the Australian Heritage Office (NSW), in 1996.

For other entries, Search under Tod.

Search's under Cork, and Thorne, will lead to other entries by these two contributors.