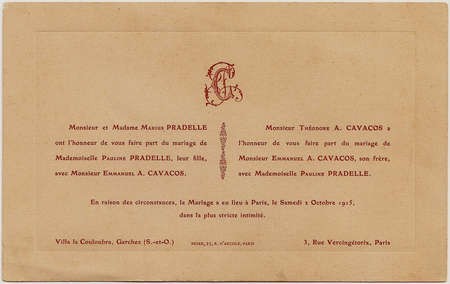 Translation of the French:
Mister and Mrs Marius PRADELLE request the honour of your presence at the marriage of Miss Pauline PRADELLE, their daughter, with Mister Emmanuel A. Cavacos.

Mister Theodore A. Cavacos requests the honor of your presence at the marriage of Mister Emmanuel A. CAVACOS, his son, with Miss Pauline PRADELLE.

By reason of the circumstances, entrance to the Marriage which will take place in Paris on Saturday, 2 October 1915, is strictly limited.

Emmanuel Andrew Cavacos was born in Potamos, Kythera, on February 10th, 1885. He emigrated to the United States of America, when he was sixteen years old, and settled in Baltimore, in the suburb of Hampden, where his brother Constantine was living. Another brother Theodore also chose to live in Baltimore. (Theodore was married to fellow Kytherian Pothiti Chlentzos). In Baltimore he formed a close friendship with Charles Fitzpatrick, with whom he communicated for many years. Photographs and Arts Programs which Cavacos sent to Fitzpatrick form the basis for this (preliminary) biographical sketch.